A Marriage of Science & Artistry

The South Carolina Historical Society houses a rich and extensive collection of historic maps and hand-drawn plats. Spanning over three centuries, from the beginning of the Carolina colony in the 1670s to the late twentieth century, these represent every region of the Palmetto State and are remarkable not only for their visual appeal, but also for the wealth of information they provide on the physical spaces of generations past. 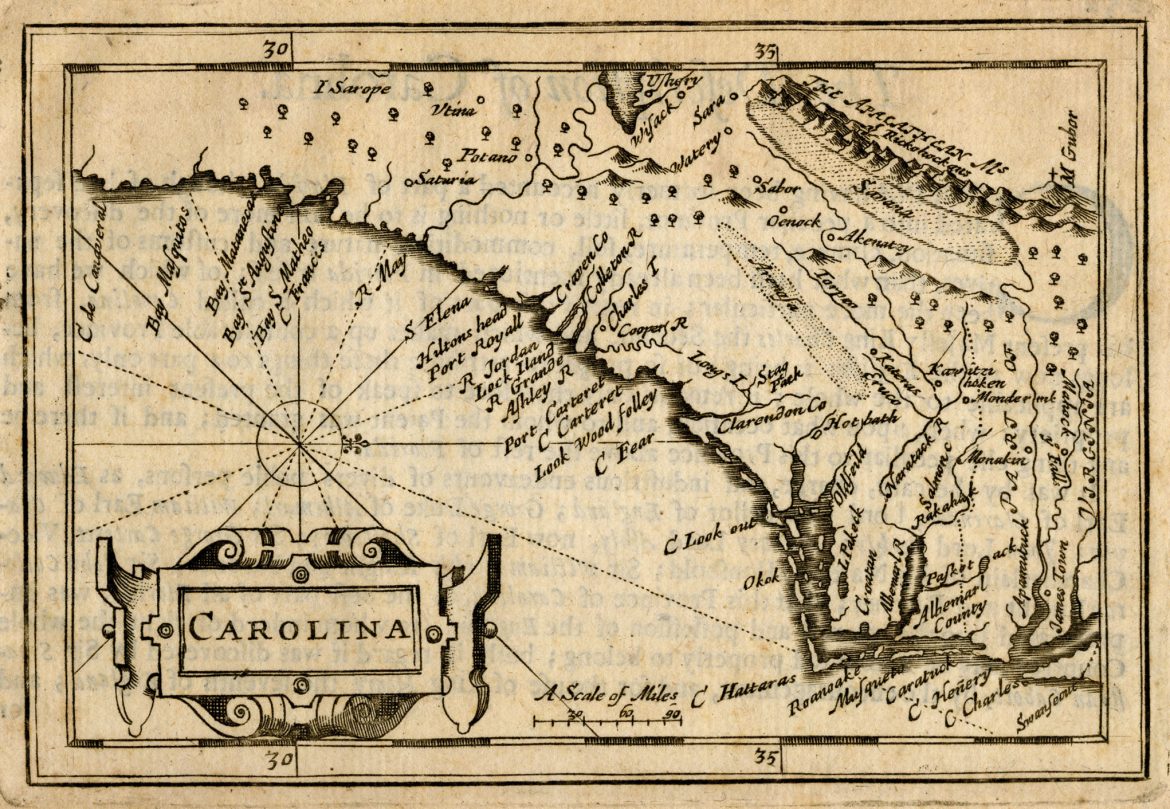 John Speed, Map of Carolina, 1675
This small printed map by John Speed depicts a swath of the present-day southeastern United States extending from the Delmarva Peninsula southward to Cape Canaveral and westward to the Appalachian Mountains. A “Description of Carolina” appears on the reverse.​ 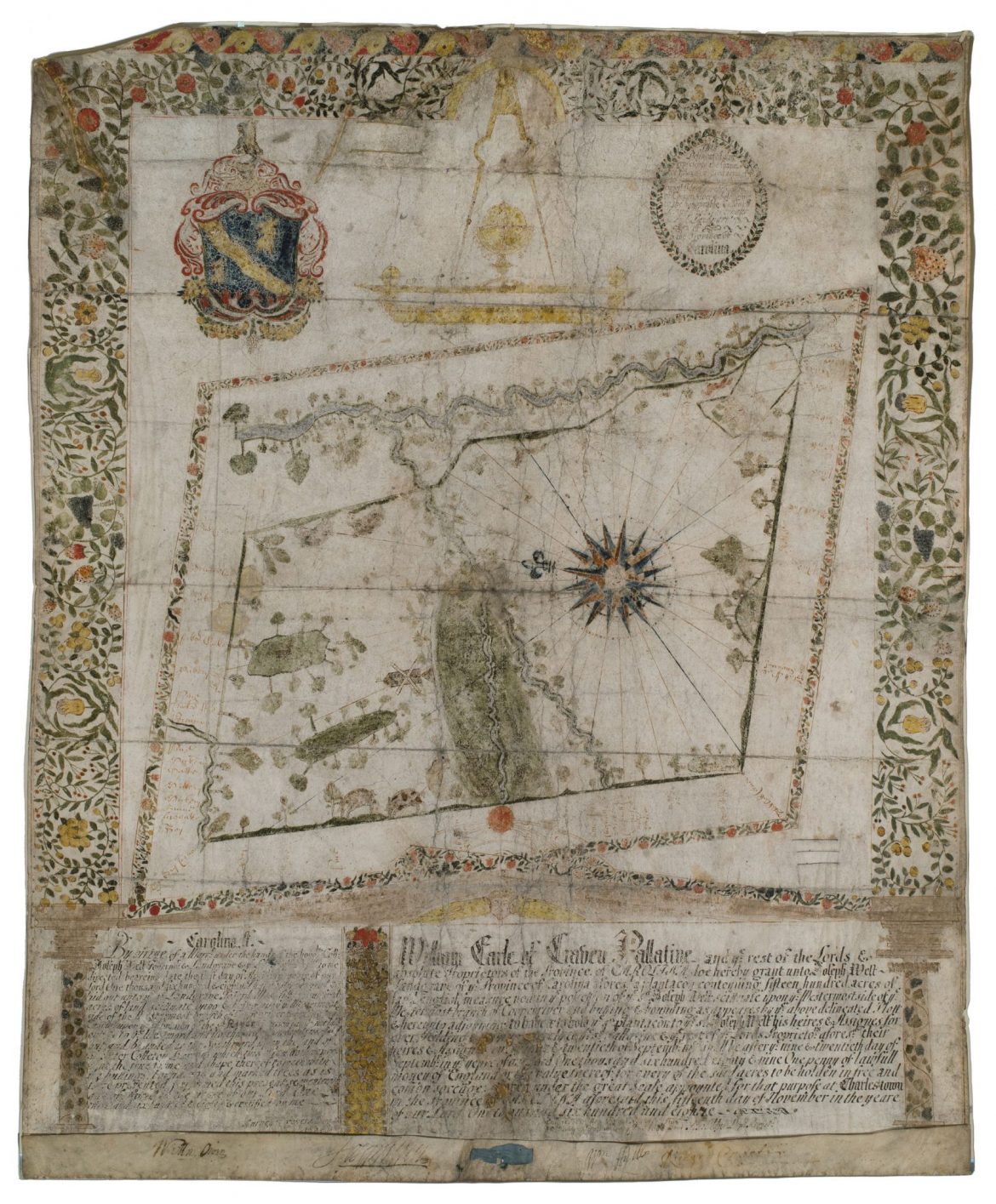 Maurice Mathews, Plat of Joseph West's Land, 1680s
This elaborately-decorated plat records the Lords Proprietors’ grant of 1,500 acres of land to Joseph West (d. 1691), one of the Carolina colony’s earliest leaders. West’s land was situated on Biggin Creek, a branch of the Cooper River, in an area that was soon settled by French Huguenots. In 1686 West sold the tract to James Le Bas, a prominent Huguenot settler. That sale is recorded on the reverse of the plat. Lettered and painted on parchment, West’s plat is filled with images of lowcountry plants and animals, elaborate cartographic elements, and structures. The windmill in the center and the house with a porch tower and gateposts in the upper right corner were likely wishful thinking in 1680s Carolina.Given Joseph West’s prominence, Maurice Mathews (b. 1627), colonial surveyor general, likely used his skills as a cartographer to make this routine public document an early work of art. 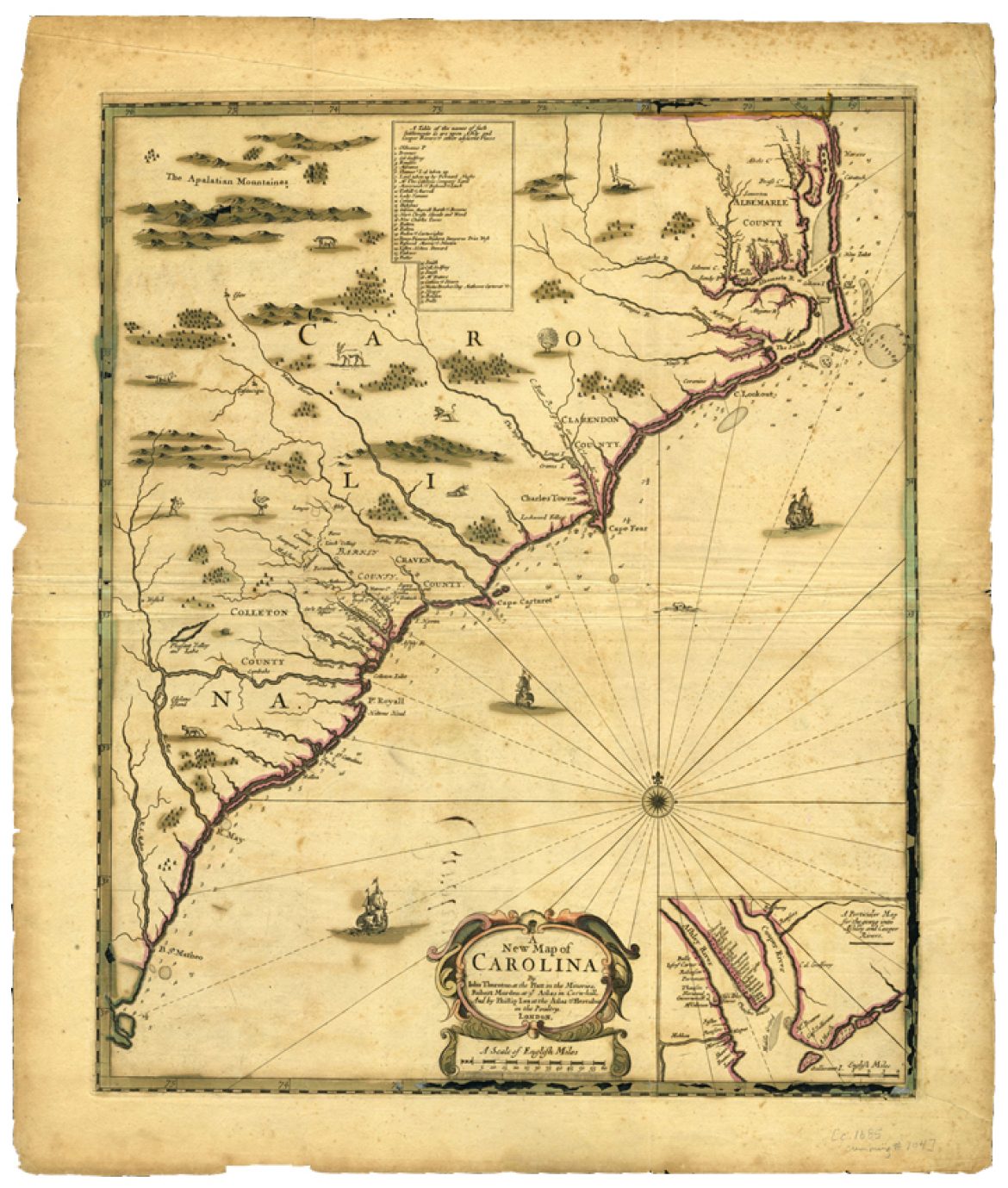 A New Map of Carolina, 1685
Drawn by John Thornton, Robert Morden, and Philip Lea; this beautifully detailed map was sold at a London toy and chinaware shop and denotes the sites of Native American towns such as Cofitachiqui. It features decorative illustrations of sailing ships and various animals. Also included is an inset titled, “A Perticuler [sic] Map for the going into Ashley and Cooper Rivers” with “A Table of the names of such Settlements as are upon Ashly [sic] and Cooper Rivers & other adjacent Places.”

Land grant to Christopher Swaine, 1689
The oldest item in the Vanderhorst family papers documents a grant of one hundred acres of land on the west side of the Stono River by “William Earle of Craven Pallatine and the rest of the Lords and absolute Proprietors of the Province of Carolina” to “Christopher Swaine, Blacksmith.” 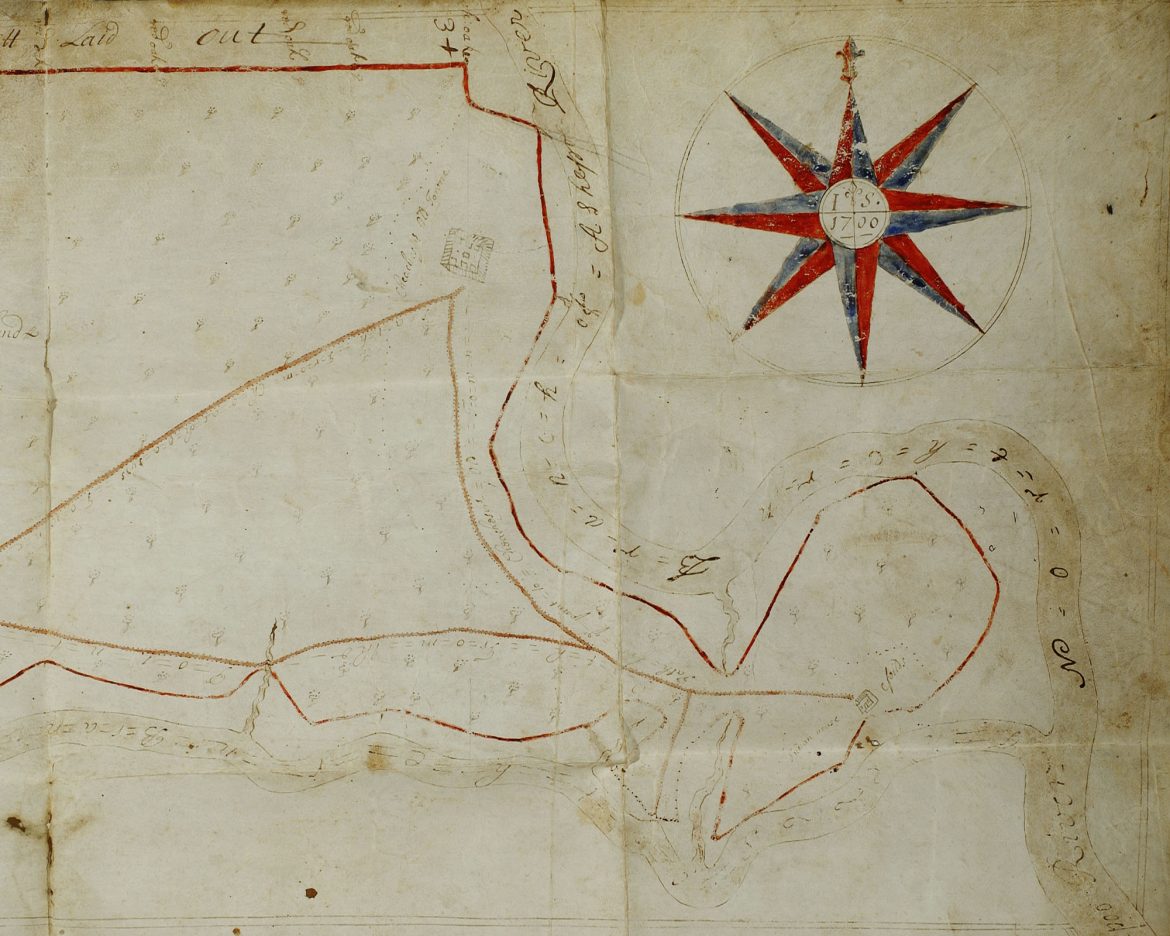 Plat of Land along Ashepoo River, 1700
Part of the Pringle-Garden family papers, this hand-colored plat depicts 1590 acres of land situated between two branches of the Ashepoo River and purchased by John Stanyarne. In addition to an “Indian house” and surrounding fields, two Yamassee Indian towns—Tuscagy Old Town (Tuskegee) and the fortified Cheachese Old Town (Chechessee)—are represented on the plat, which was drawn approximately fifteen years before the start of the Yamassee War. 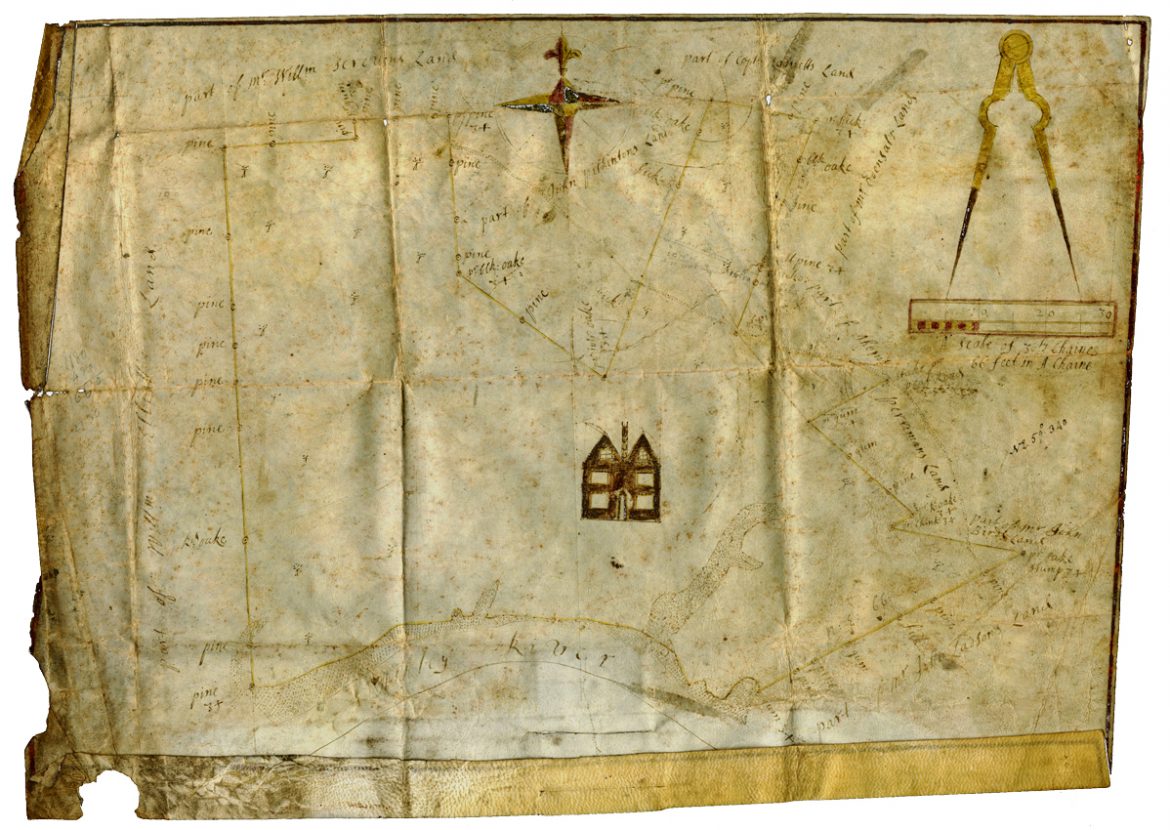 Plat of Ashley River Lands, 1705
This 1705 plat depicting land granted to Christopher Smith along the Ashley River features a drawing of a double-gabled house and notes various species of trees on the property, including pine, oak, and gum. Often used as part of descriptions to mark the metes and bounds of a property, natural features of the landscape were an important feature of early land granting. This plat shows adjoining property owners, including William Elliott and John Ladson. 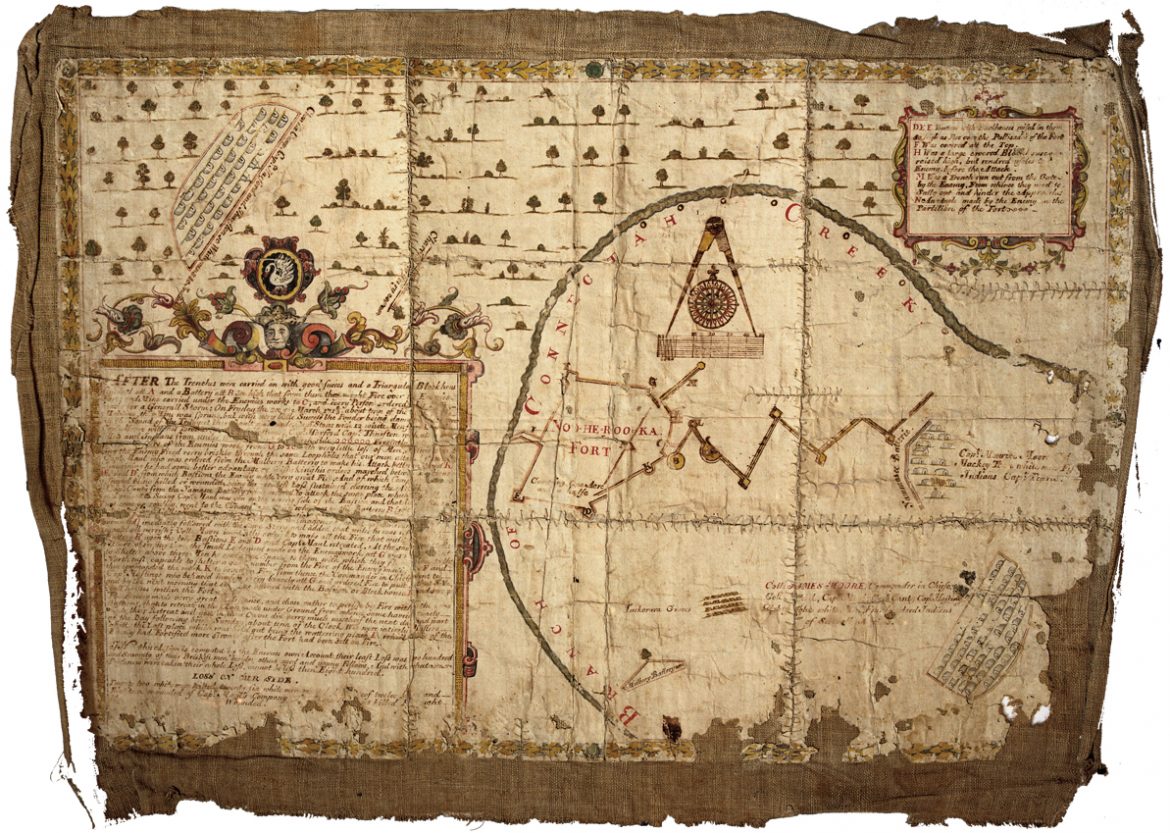 Map of Noo-He-Roo-Ka-Fort, 1713
This map illustrates Colonel James Moore’s attack on the Tuscarora fort known as Nooherooka in March 1713. The map bears the Moore family crest and contains illustrations of the fortifications, trenches, and landscape features surrounding the fort. It also includes a detailed description of the events that took place during the battle, which was the final military encounter of the Tuscarora War. 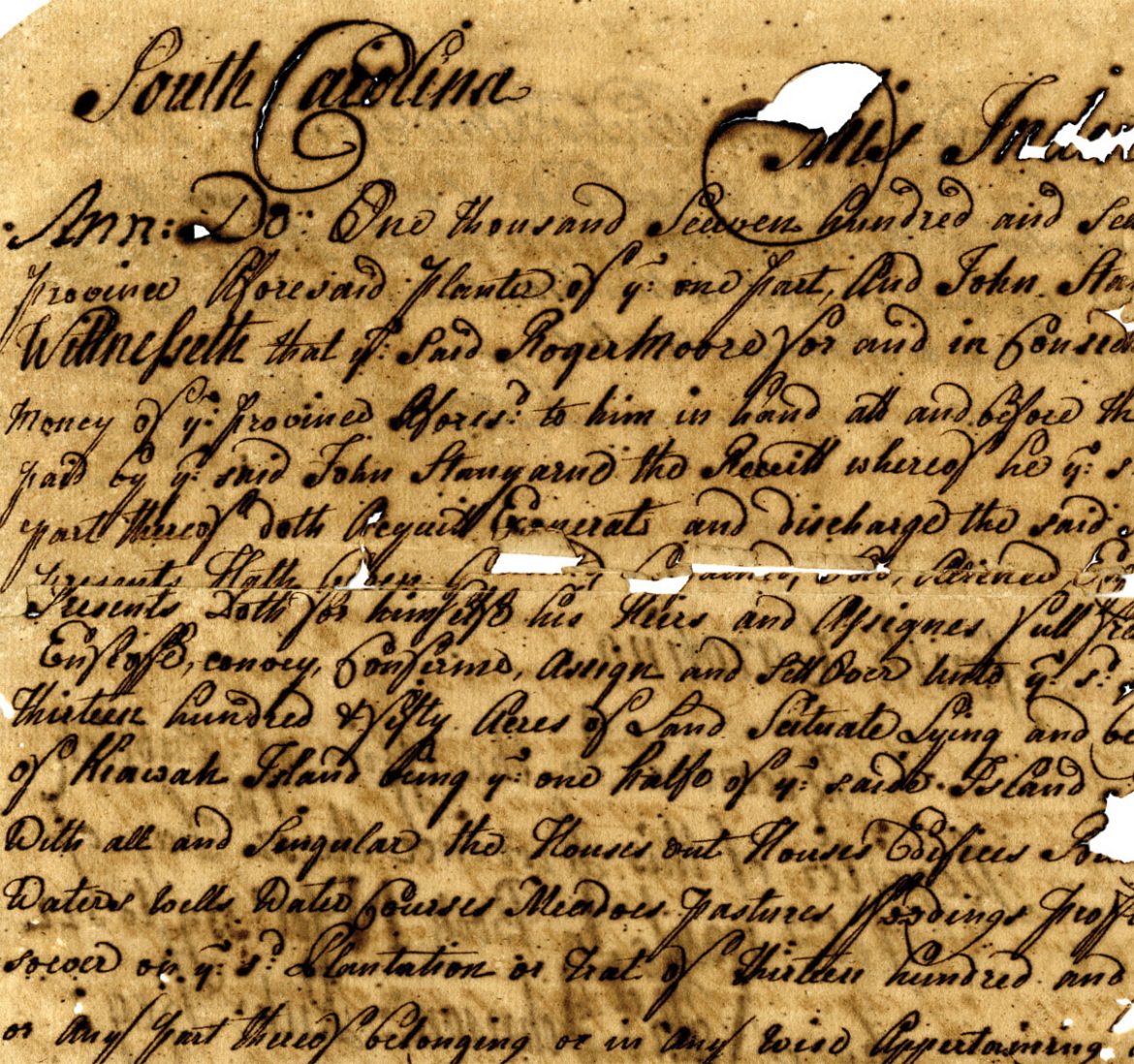 Indenture, 1717
After being made the sole owner of Kiawah Island with this indenture, John Stanyarne soon became the first successful planter on the island, cultivating indigo and raising herds of cattle and other livestock. The Vanderhorsts came into possession of the eastern half of the island when Arnoldus Vanderhorst II married Stanyarne’s granddaughter, Elizabeth Raven, in 1771. 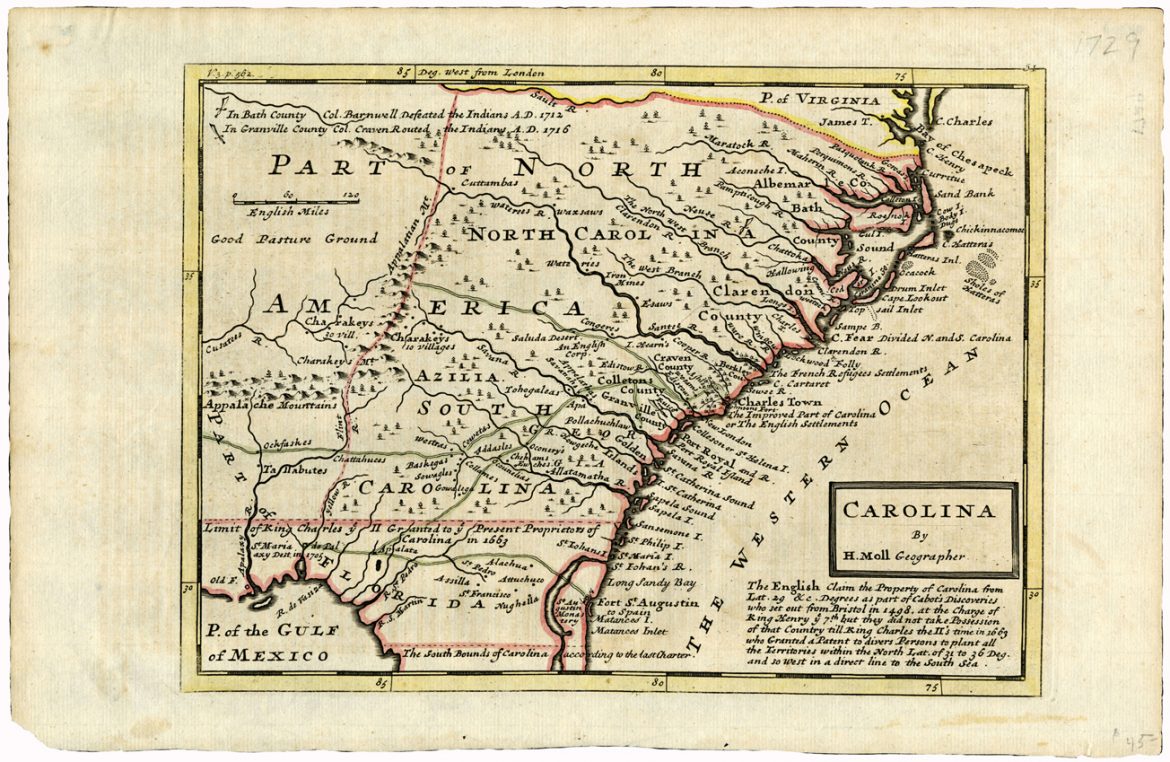 Herman Moll, Map of the Province of South Carolina, c. 1730
Executed by Herman Moll, this map illustrates the locations of English, French, and Indian settlements in addition to important sites related to the Tuscarora and Yamassee Wars (“Here Coll. Barnwell Defeated the Indians A.D. 1712,” “Here Col. Craven Routed the Indians A.D. 1715”). Though both North​ and South Carolina are shown there is no clear boundary between them between them; their governors in fact met with the Lords of Trade this same year to argue over the dividing line.​ 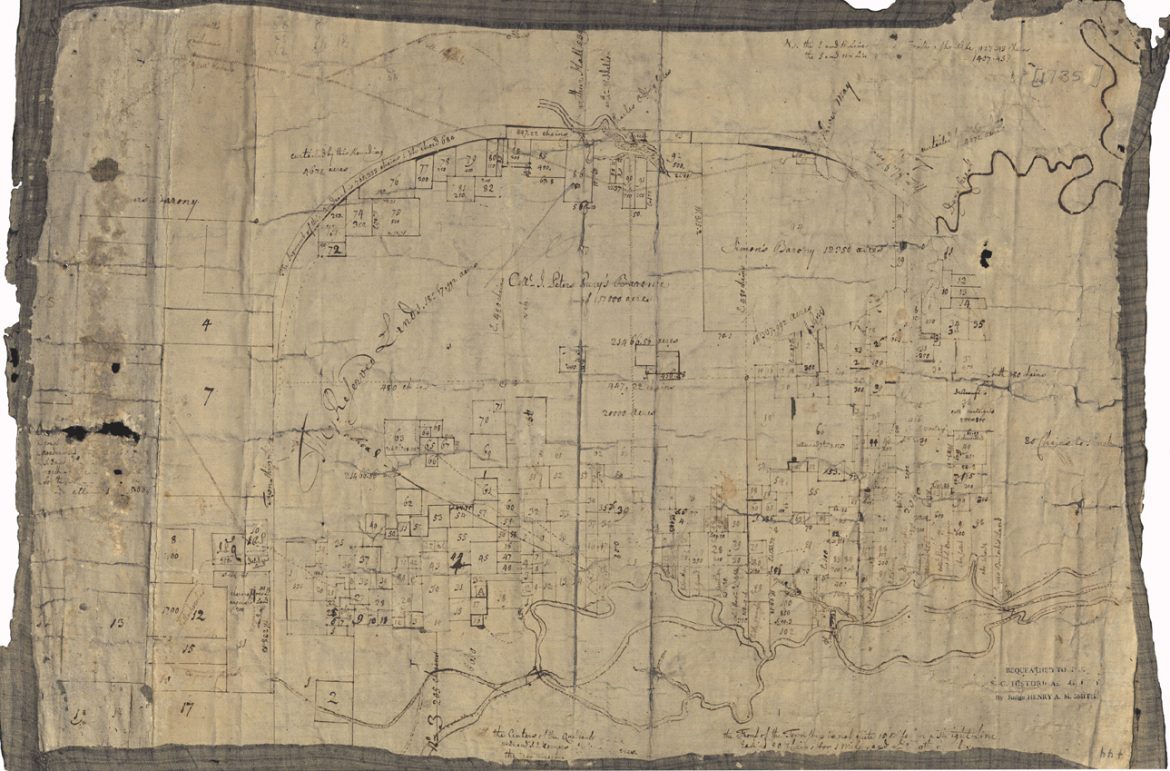 Plat of Purrysburg, c. 1735
This map, dating to circa 1735, depicts the town of Purrysburg and surrounding grants to settlers. The landowners’ names include many Swiss and German families that were the original settlers of Purrysburg. 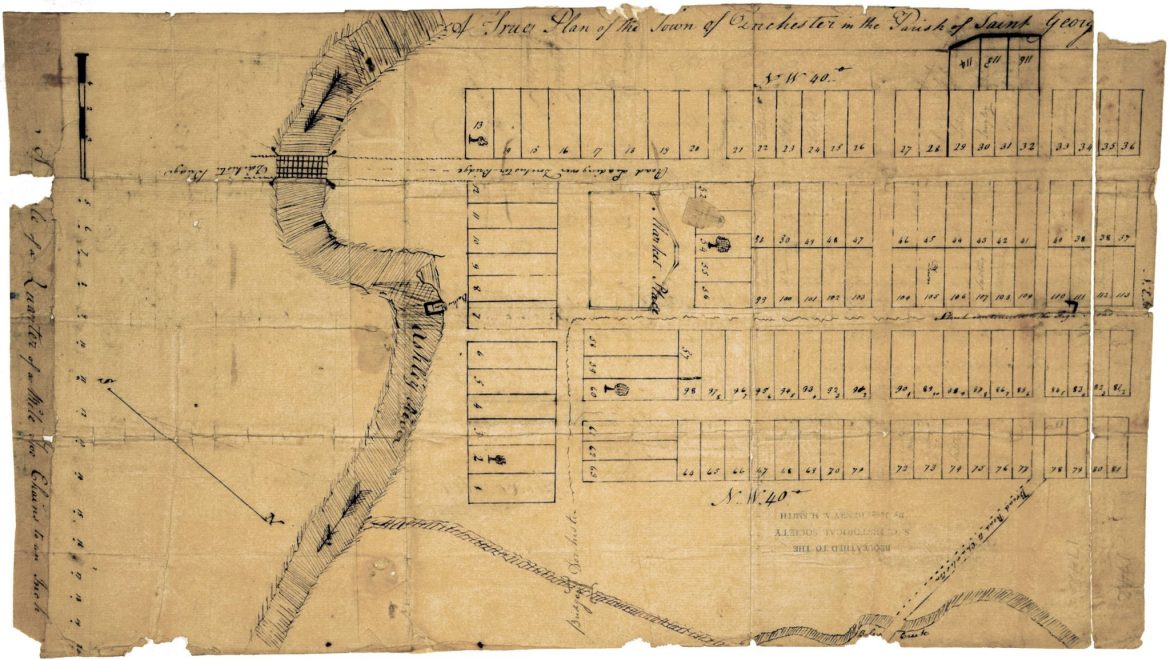 A true plan of the town of Dorchester in the parish of St. George, 1742
Founded in 1697 by Congregationalists from the Massachusetts town of the same name, Dorchester was a market village located about twenty miles northwest of Charleston. By 1760, Dorchester boasted a parish church, free school, and tabby fort in addition to a variety of businesses, but its unhealthy location and the devastation it suffered during the Revolutionary War eventually led to its abandonment. This plan illustrates the orderly grid of the once-flourishing town and important sites such as the marketplace and bridge over the Ashley River.​ 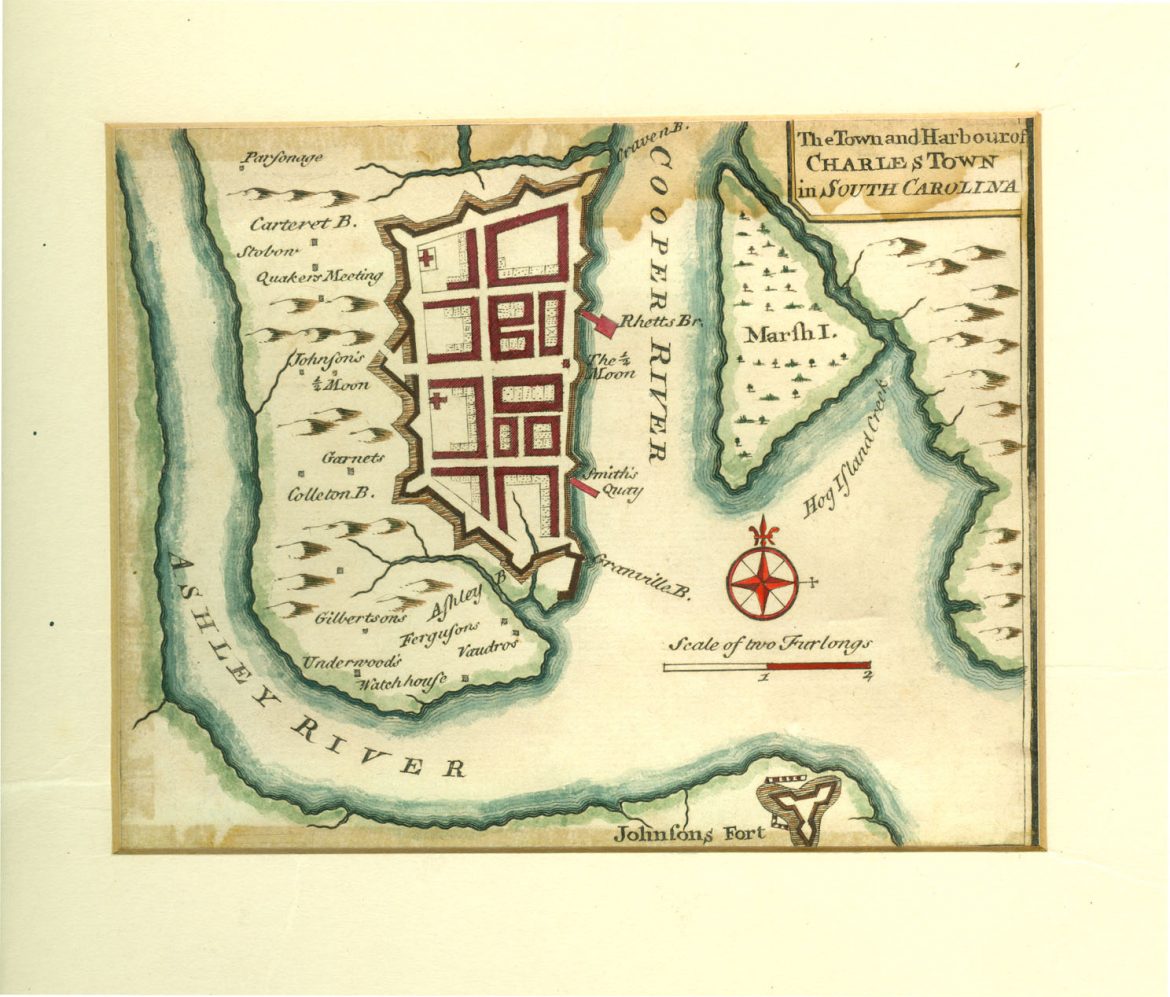 Emanuel Bowen, The town and harbour of Charles Town in South Carolina, 1747
Taken from Emanuel Bowen’s "A Complete Atlas . . . of the Known World" (1752), this map of Charles Town’s city walls and Fort Johnson on James Island was outdated by 1747, but it reveals the colony’s attention to military defense. In 1747 Great Britain battled Spain in the War of Jenkins’s Ear to gain Caribbean territory and retain control of the African slave trade. 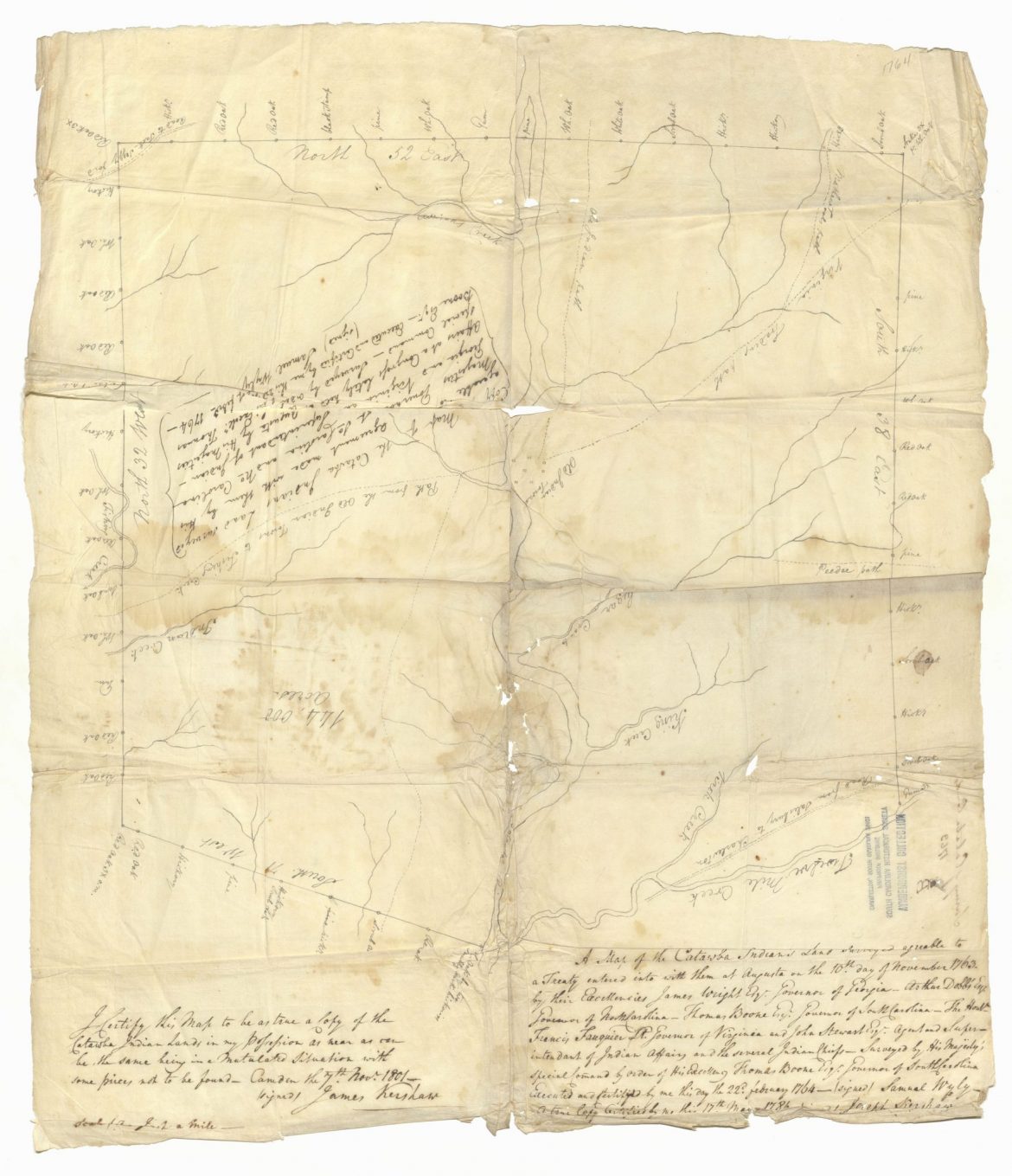 Sam Wyly, Map of Catawba Land, 1764
With the signing of the Treaty of Augusta on November 10, 1763, the Catawbas of South Carolina were ceded a tract of approximately 144,000 acres of land in return for their allegiance to Great Britain during the French and Indian War. Executed by Sam Wyly, this map depicts the Catawba reservation in present-day York and Lancaster Counties shortly after the treaty’s signing and includes the “Old Indian Towne,” the road from Salisbury to Charleston, and numerous paths (“Virginia trading path,” “Pee-dee path”).​ 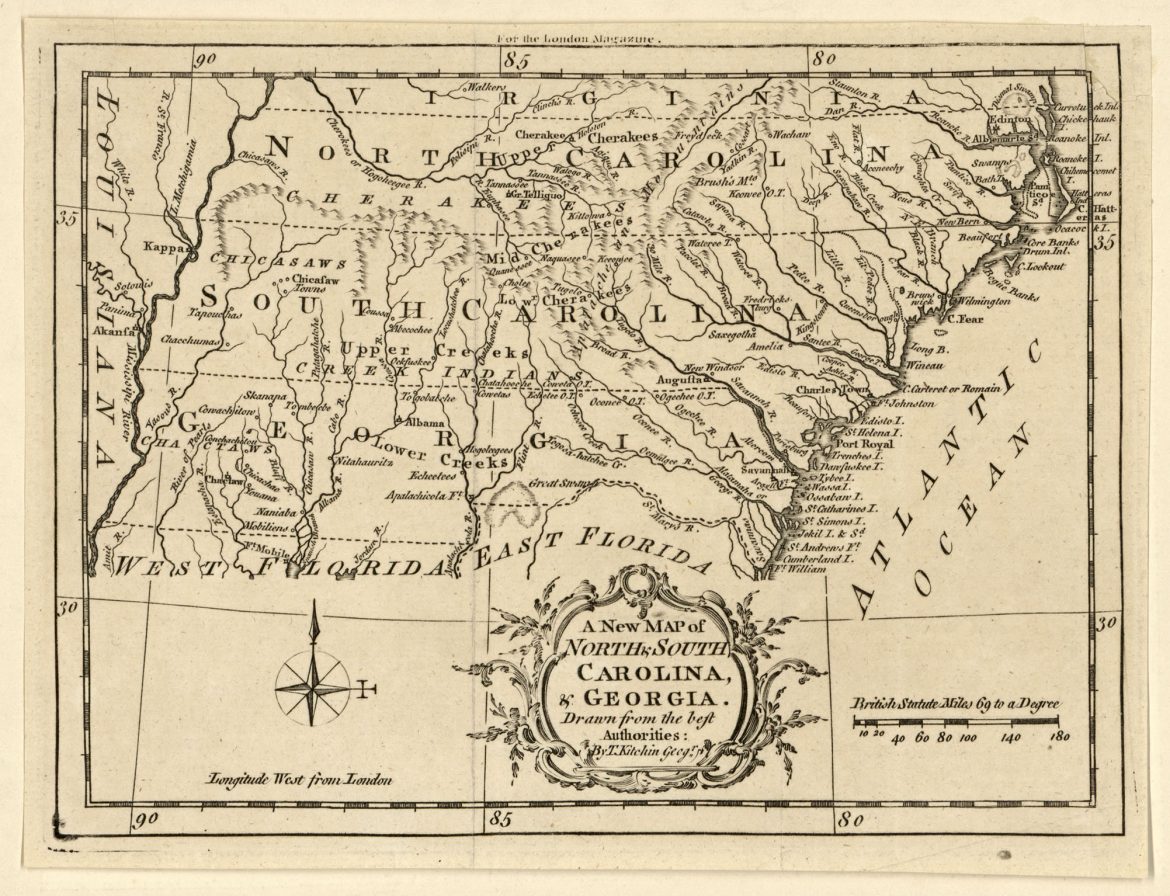 Thomas Kitchin, A new map of North & South Carolina, & Georgia, 1765
Thomas Kitchin (1718‒84), was an apprentice to Emanuel Bowen and also an engraver of art prints, portrait prints, and book illustrations. He published 170 maps in the “London Magazine, Or, Gentleman’s Monthly Intelligencer”, one of the longest running and widely disseminated magazines of eighteenth-century British culture and society. This map was accompanied with a description of conditions in South Carolina and the southeastern British empire of that period and features several backcountry townships established during Robert Johnson’s royal governorship. 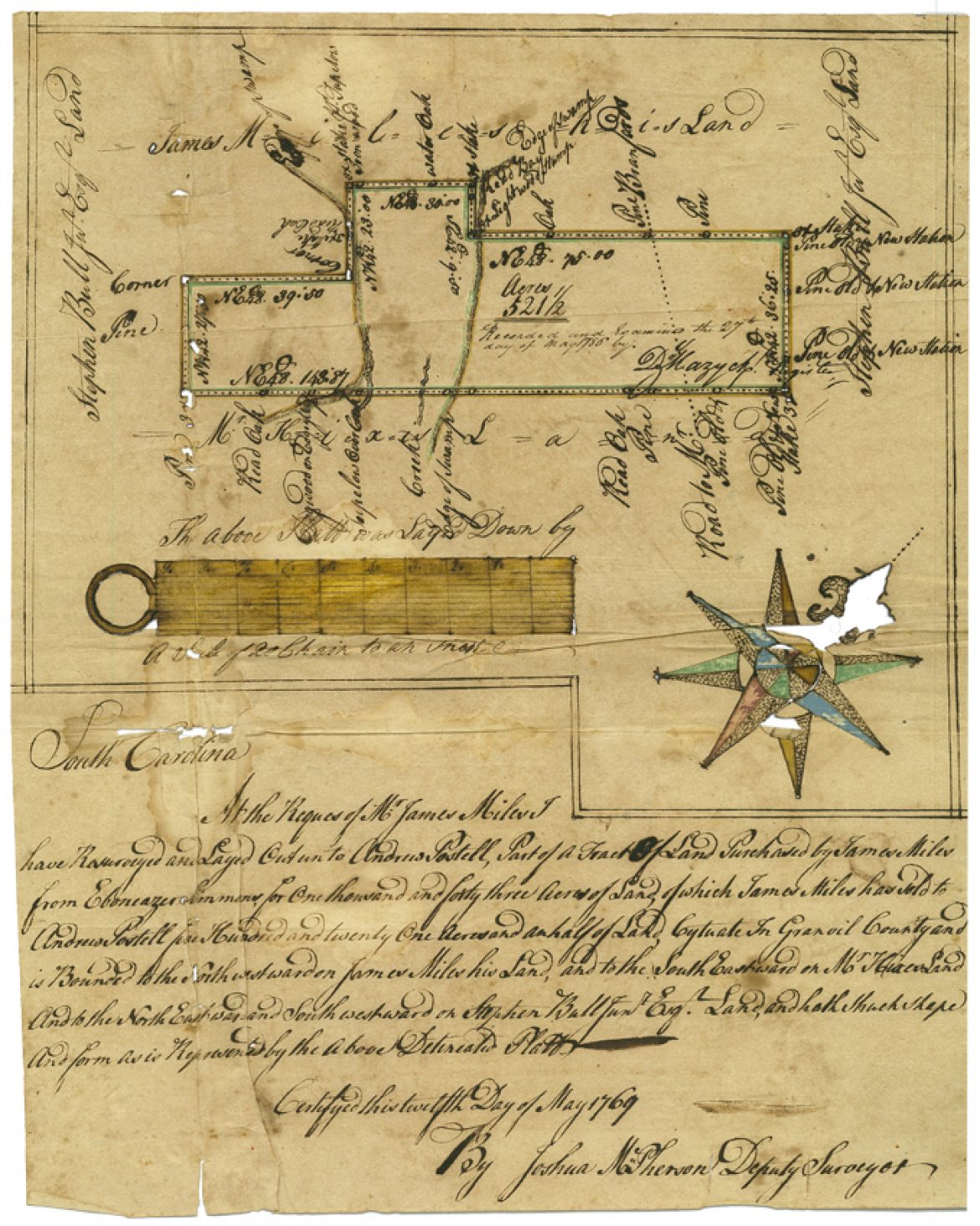 Plat of Granville County Land, 1769
Surveyed by Joshua McPherson, this plat illustrates a 521½-acre tract of land located in Prince William Parish and conveyed by James Miles to Andrew Postell. In addition to the lovely pastel-colored compass, the plat exhibits a feature commonly found in early South Carolina land records: the use of trees as points of reference. In this small plat alone, pine, tupelo, dogwood, and several varieties of oak trees are all indicated. 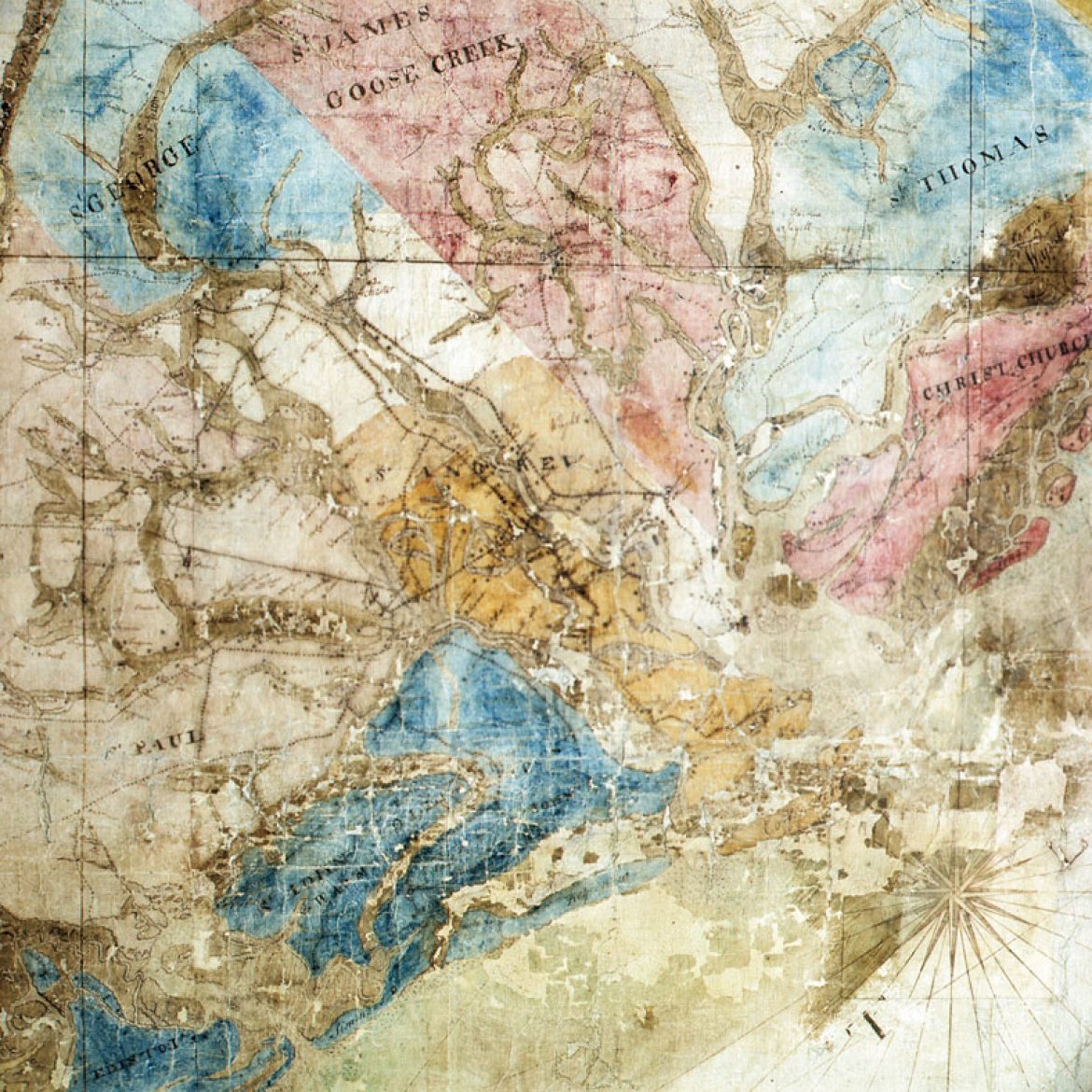 Gaillard-Cook Map, 1770
This map, a color manuscript on linen, was purportedly presented to the South Carolina Commons House of Assembly on March 21, 1770, by surveyors Tacitus Gaillard and James Cook. The map depicts only the eastern half of the state; the whereabouts of the portion depicting the western half are unknown. In addition to towns and villages, the cartographers included the locations of individual farms and plantations. The variously colored sections represent the parishes of South Carolina. The Gaillard-Cook map is believed to have been the basis for many other charts of the state, including the Lodge-Cook map of 1771 and the Henry Mouzon map of 1775. 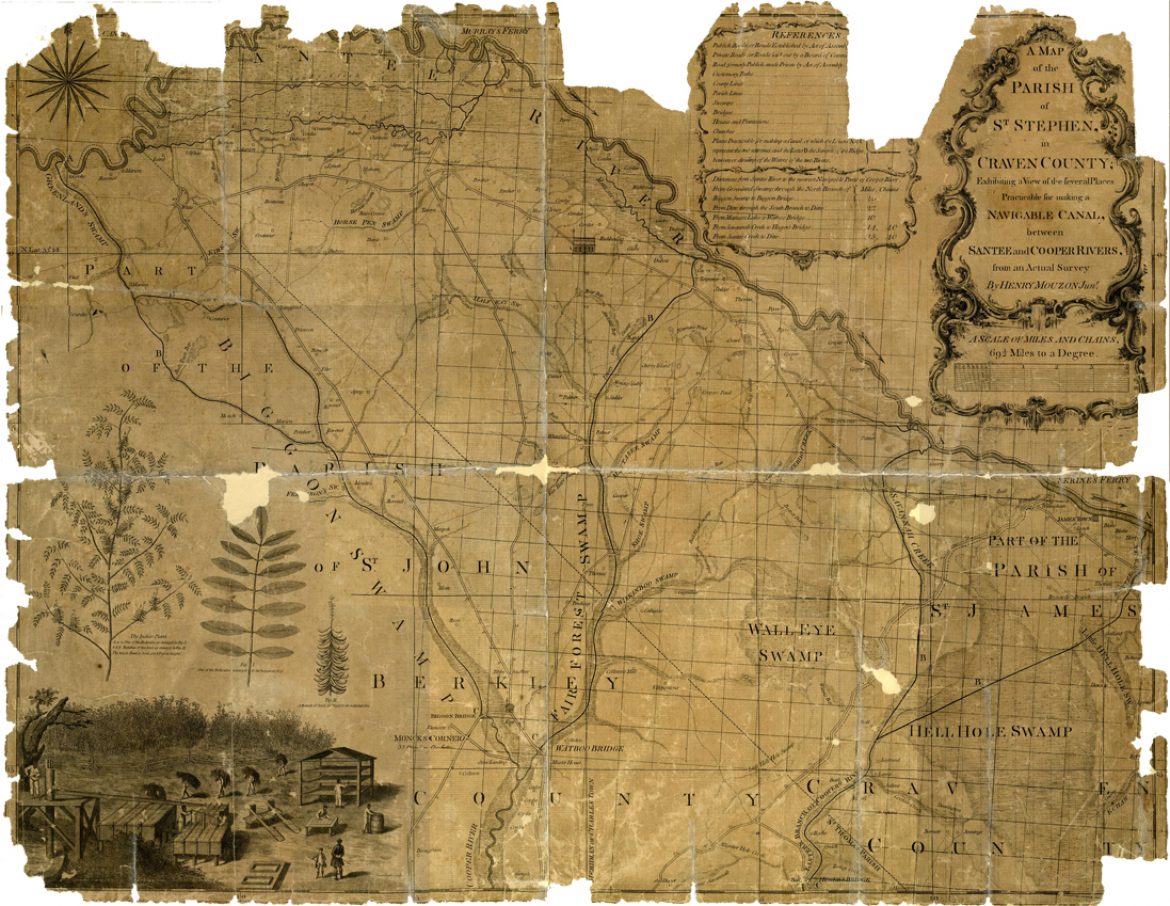 Henry Mouzon II, A Map of the Parish of St. Stephen, in Craven County, 1773
Executed by Henry Mouzon II, a Sorbonne trained civil engineer and surveyor born in present-day Williamsburg County, this map depicts “several Places Practicable for making a Navigable Canal, between Santee and Cooper Rivers” as well as the locations of houses (identified by property owners), public and private roads, churches, taverns, and even a race course. Illustrations of indigo plants and enslaved persons working in a field on an indigo plantation are prominently featured in the lower left corner.​