Tales of their Travels

A Glimpse at Colonial Migration and Movement in South Carolina

From its first days as an English colony, South Carolina was an economic frontier and a religious haven. Once proclaimed throughout England and Europe, that freedom was as much a beacon for Nonconformist (non-Anglican) Protestant, French Huguenot, and Jewish immigrants as were promises of cheap land and economic opportunity. The society’s collections hold many pieces of evidence describing conditions, environmental and social, as colonists ventured to and from South Carolina. 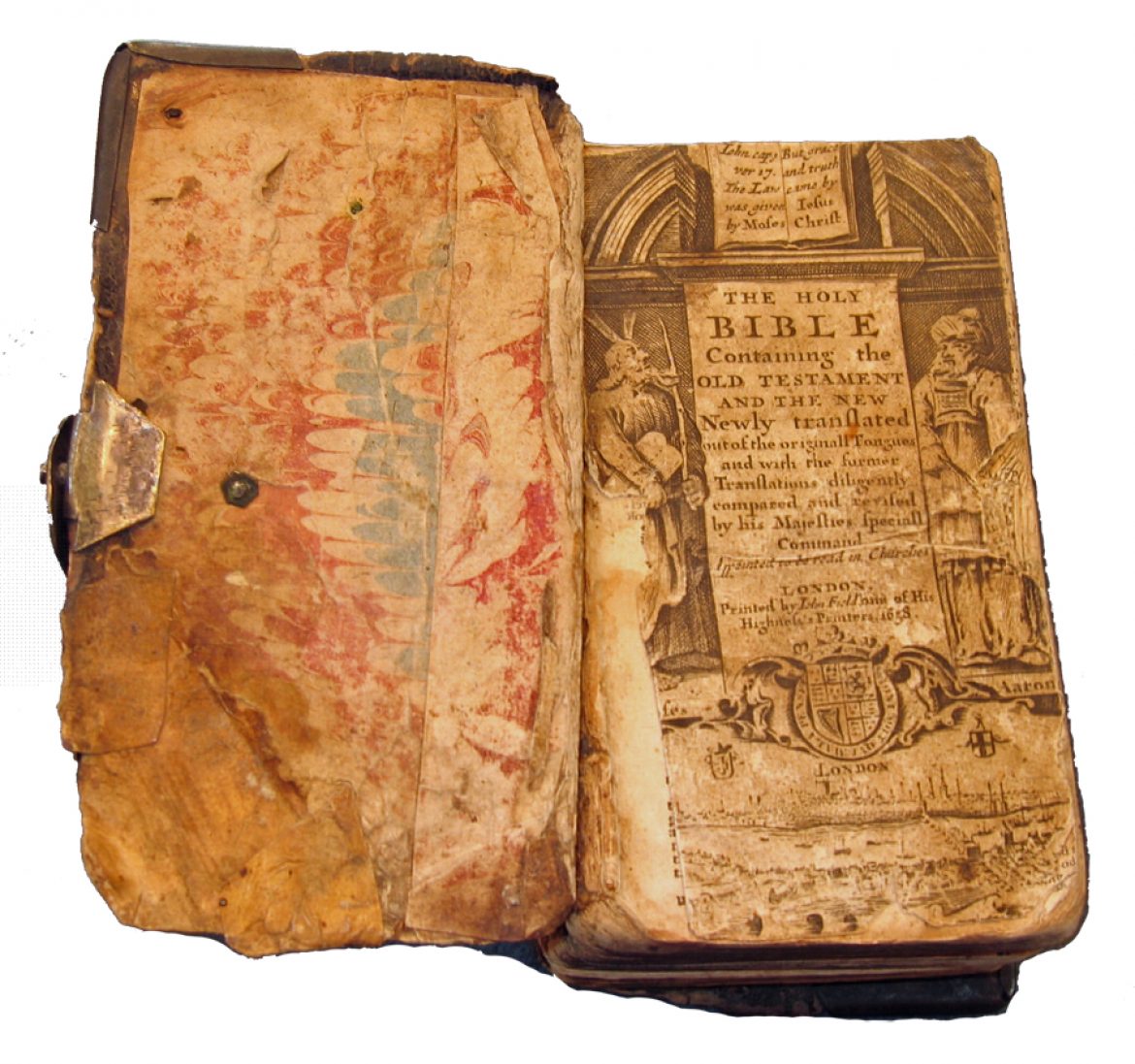 Reverend Archibald Stobo’s King James Bible, 1658
Archibald Stobo (d. circa October 1741) was a founding patriarch of the Presbyterian Church in South Carolina. Sailing with his family and other refugees to Charleston (then called Charles Town) on the British warship Rising Sun, the vessel shipwrecked during a hurricane on September 3, 1700. His Bible and psalmody were the only items he recovered from the wreck. Stobo was a fearless defender of religious liberty in early South Carolina. 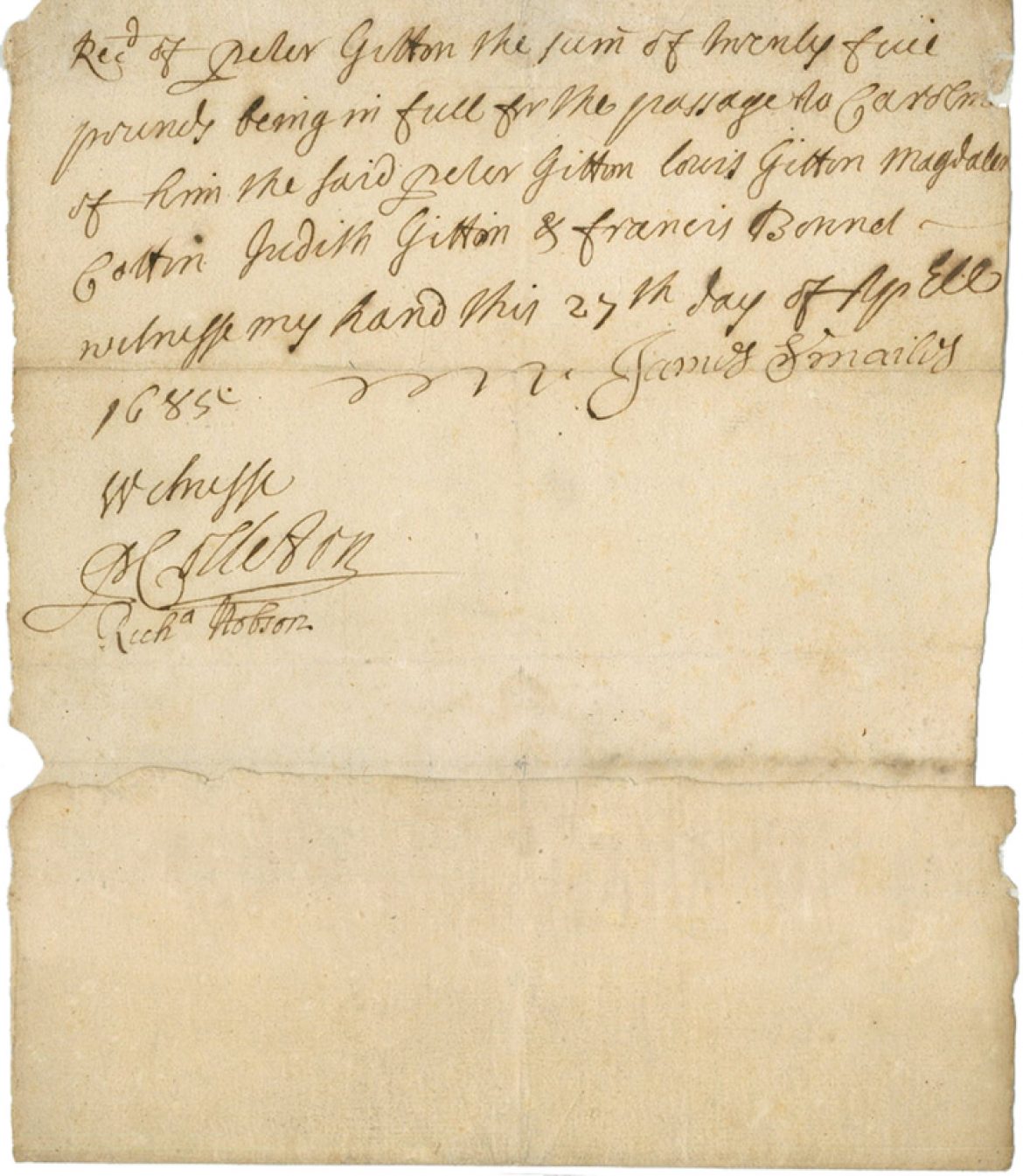 Receipt, 1685
The revocation of the Edict of Nantes in 1685 by Louis XIV led many French Huguenots to flee France and seek religious freedom in neighboring countries and in the North American colonies, including the Carolina colony. This receipt for passage money, dated April 1685, is for the Giton family of La Voulte in southern France. It includes passage for Judith Giton, who would go on to marry fellow French Huguenot refugee Pierre Manigault in 1699. 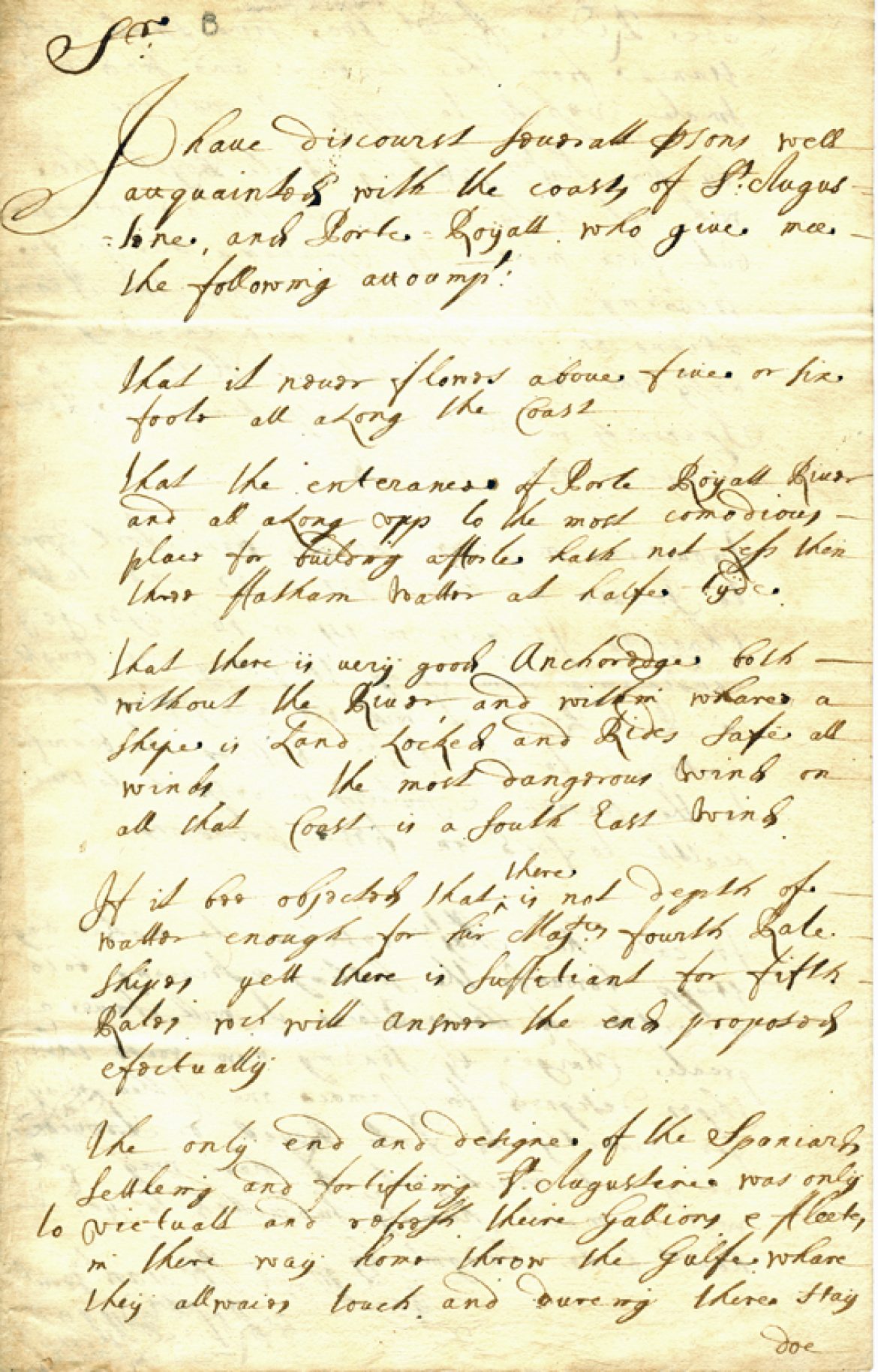 Robert Quarry, Letter, 1685
Robert Quarry immigrated to the Carolina colony in 1684 from England and would briefly serve as interim governor in 1685, following the death of Sir Richard Kyrle. In this letter, Quarry presents in detail the advantages of fortifying and securing Port Royal (S.C.) as a bastion against the activities of the Spaniards in St. Augustine. "Provisions may be carried from Port Royal to Jamaica in ten days or twelve and to the Caribbean Islands in fourteen or sixteen days...considering how cheap they may be bought in Port Royal it will be a very great advantage”. Following several years of accusations by the Lords Proprietors that he aided pirates and his involvement in an attempt to overthrow proprietary rule, Quarry left for Philadelphia in 1693 and would go on to serve as the crown’s surveyor general of customs in America. 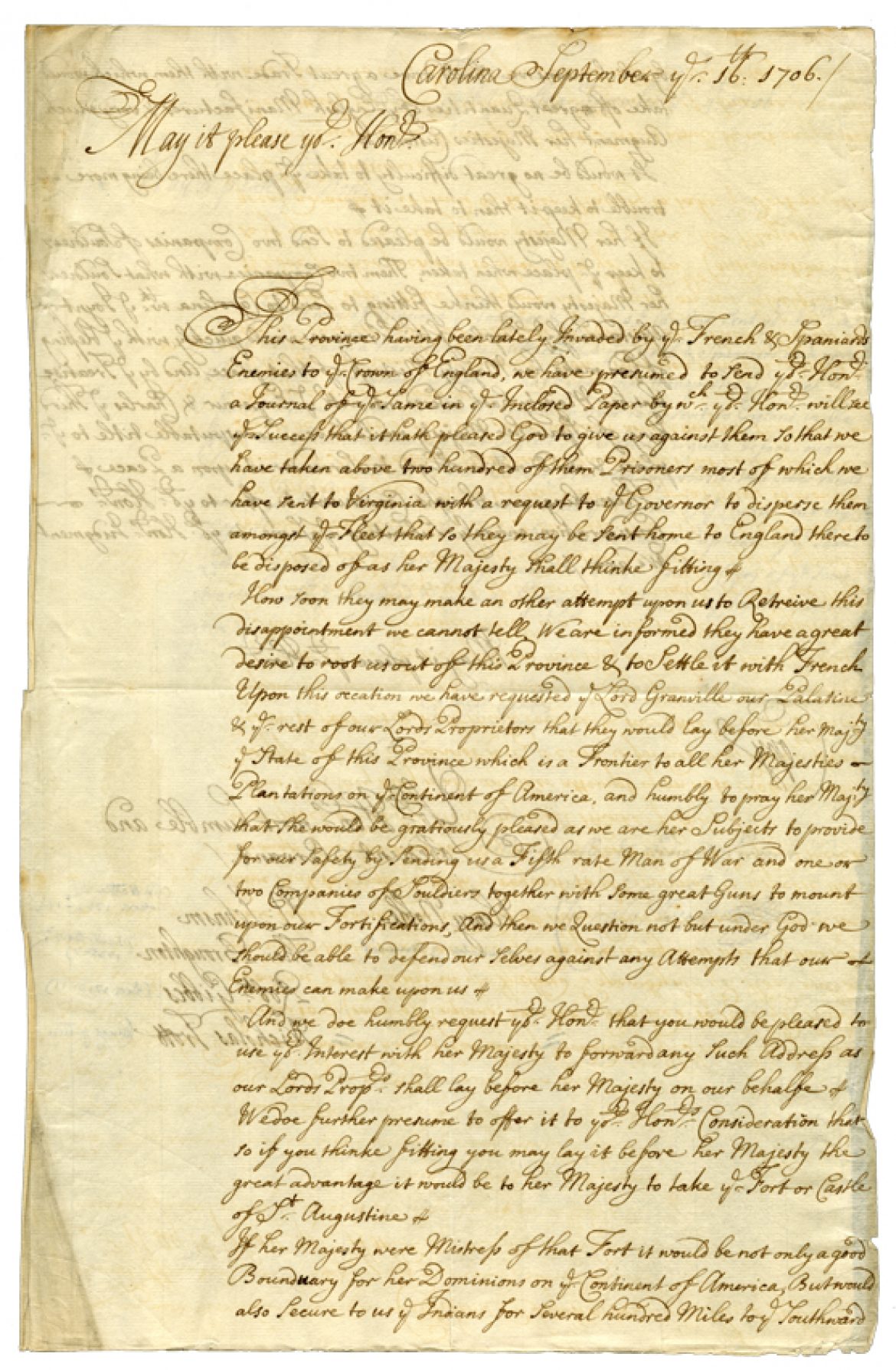 Nicholas Trott, Letter, 1706
Nicholas Trott arrived in Charles Towne in 1699 as attorney general and naval officer following his appointment as attorney general in Bermuda. He later became Chief Justice of South Carolina and served as a member in the South Carolina Commons House of Assembly. Trott submitted this letter, dated September 16, 1706, and the report “An Account of [ye] Invasion of South Carolina by the French & Spaniards In the Month of August 1706" in a November 1706 message to the Crown of England. Trott’s letter to the Queen, by way of the Governor of Virginia and Council of Carolina, reports on the French and Spanish prisoners, asks for more military protection for the province, and suggests that it would be a "great advantage" for the English to take Saint Augustine. 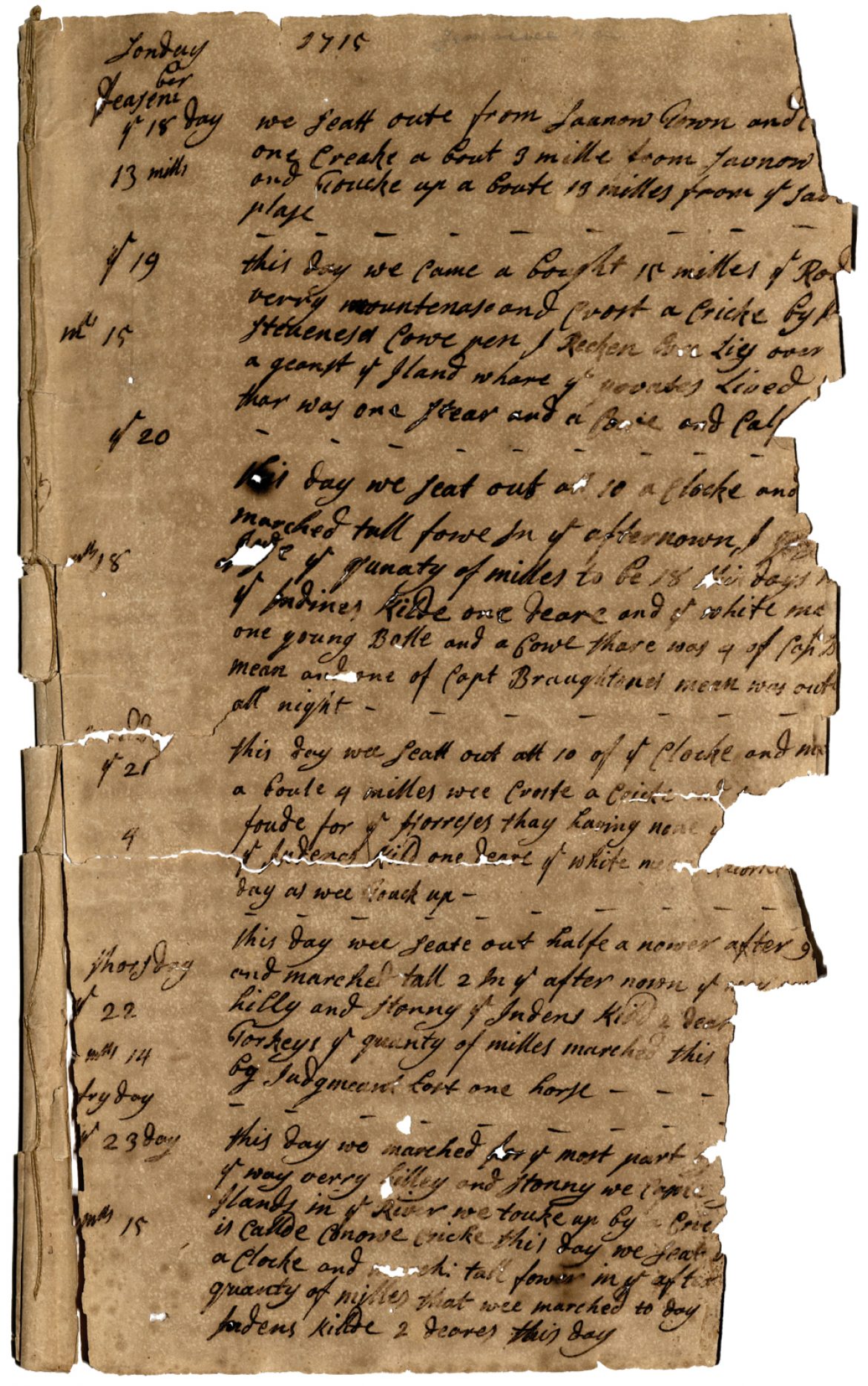 George Chicken, Journal, 1715-1716
Successive waves of settlers in South Carolina encountered a full range of reactions from Native Americans. Initial amity degenerated as whites exploited, enslaved, and killed the aboriginal inhabitants of the coast. Wary alliances and brutal wars were the major elements of Native Americans’ eighteenth-century life. George Chicken (d. 1727) was a plantation owner from Goose Creek, South Carolina, a member of the S.C. Commons House, and a militia officer. From 1712 to 1727, Chicken was involved in forming the province’s policies concerning the neighboring Native Americans, and he also took an active part in fighting as captain of the Goose Creek militia company during the Tuscarora War (1711-1713) and the Yemassee War (1715). In 1715-1716, Chicken helped to establish a treaty with the Cherokee tribe, thwarting French hopes for a Creek-Cherokee alliance against the English. Entries in Chicken’s journal list daily experiences during the march to the Cherokee settlements of northwestern South Carolina and treaty negotiations with the Indians. 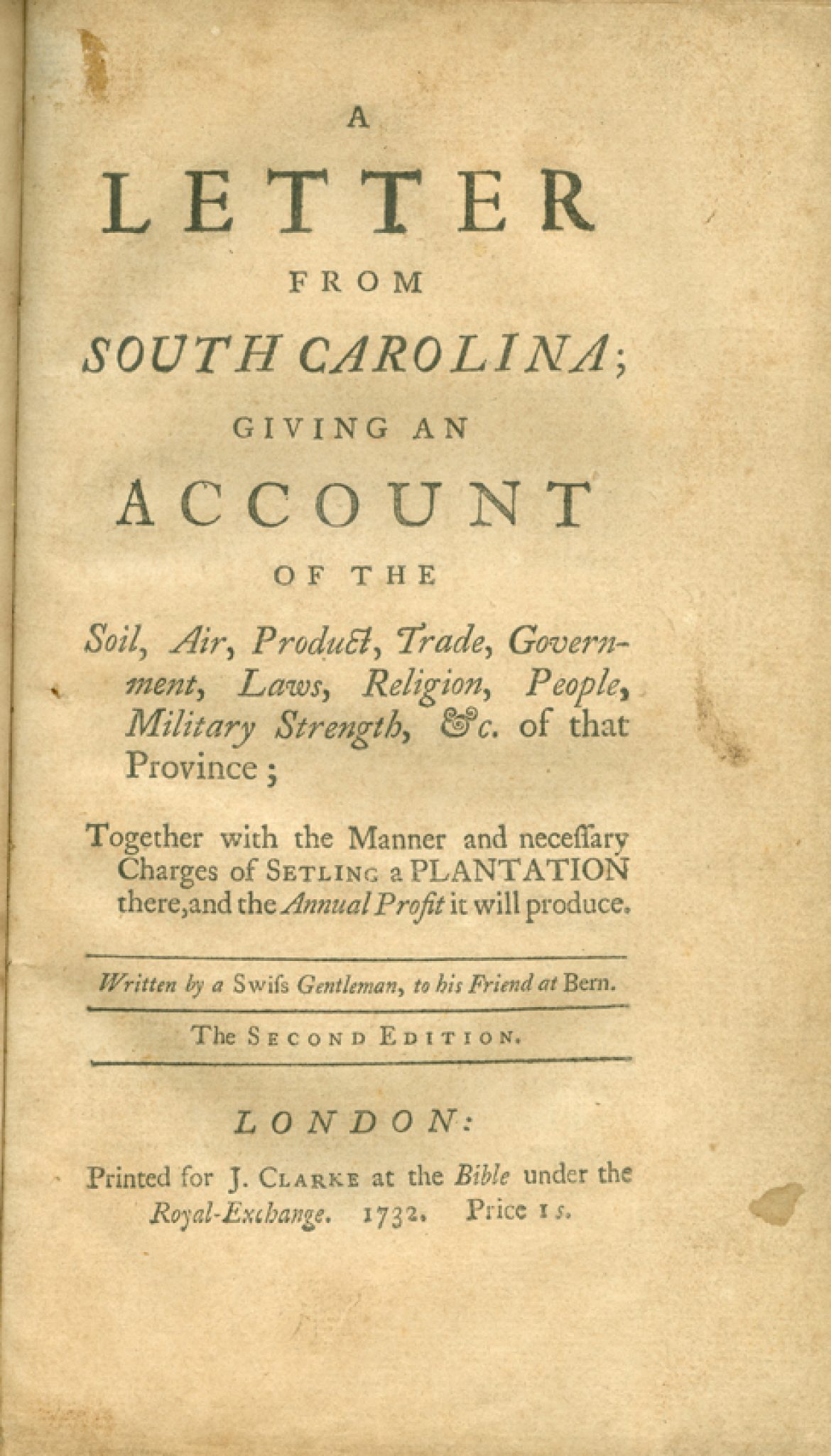 Thomas Nairne, A letter from South Carolina : giving an account of the soil, air, product, trade, government, laws, religion, people, military strength, &c. of that province; together, with the manner and necessary charges of settling a plantation there, and the annual profit it will produce., 1732
Thomas Nairne authored this promotional pamphlet in 1710 in an attempt to recruit settlers to the South Carolina colony. Originally from Scotland, Nairne was a frontiersman, member of the Commons House of Assembly, and the colony’s first Indian agent. Nairne traveled extensively throughout the Southeast meeting with tribes and attempting to stop unlicensed trading. Nairne would live only another five years after this pamphlet was first published. In 1715, following years of abuse by traders and fearing encroaching European settlement in the area, fighting broke out between the Yamassee and white settlers, south of Charleston. Nairne was captured and put to death during an attempt to negotiate with the tribe in Pocotaligo in April of that year. 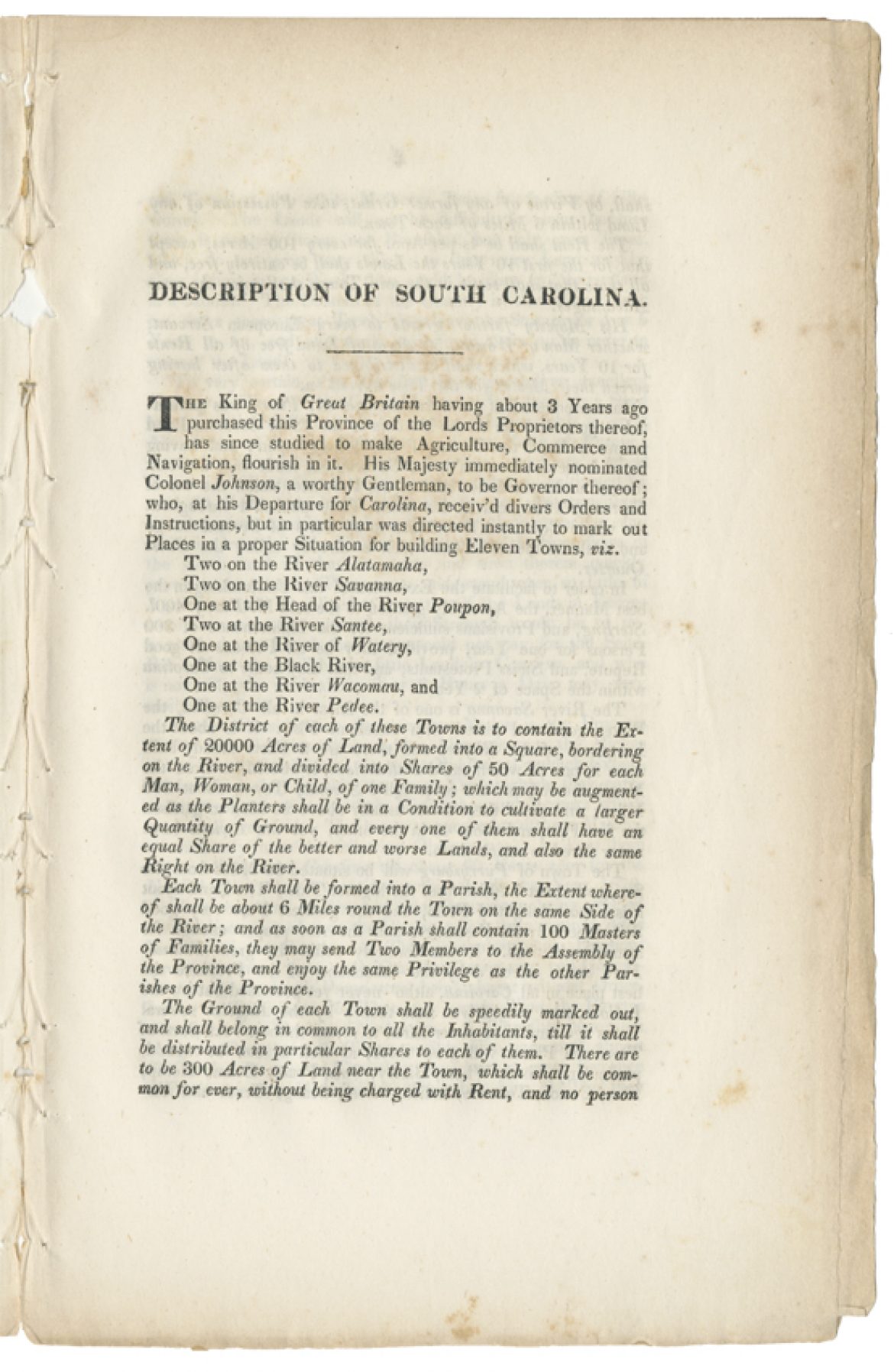 Jean-Pierre Purry, A description of the province of South Carolina : drawn up at Charles Town, in September, 1731., 1837
This treatise by Jean-Pierre Purry (1675–1736), first published in 1732, presented his plan for bringing settlers to South Carolina and establishing a town on the Savannah River. Soon afterward, Purry and about three hundred Swiss colonists settled the township of Purrysburg. His treatise emphasized South Carolina’s favorable conditions for agriculture and trade. “Tis very certain,” wrote Purry, “that Carolina is in general an excellent country.” 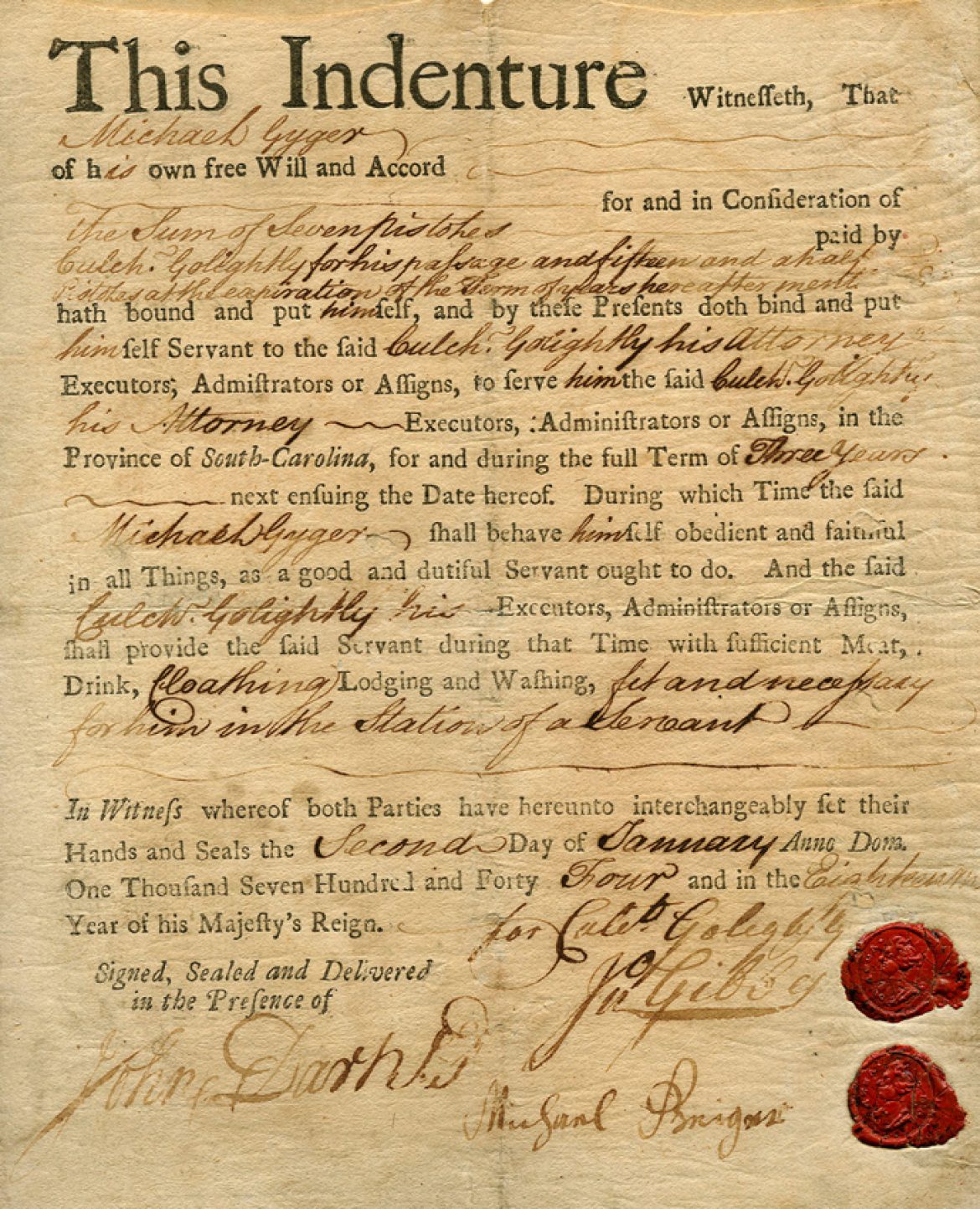 Indenture, 1744
Indentured servitude funded the passage to America for many colonists, but South Carolina differed from the other English colonies in that slave labor was preferred rather than temporary contractual service. In this indenture, dated January 2, 1744, Michael Gyger binds himself as a servant to Culcheth Golightly for a term of three years as payment for his passage to the New World. Golightly also “shall provide the paid Servant during that Time with sufficient Meat, Drink, Cloathing, Lodging, and Washing, fit and necessary for him in the Station of Servant.” 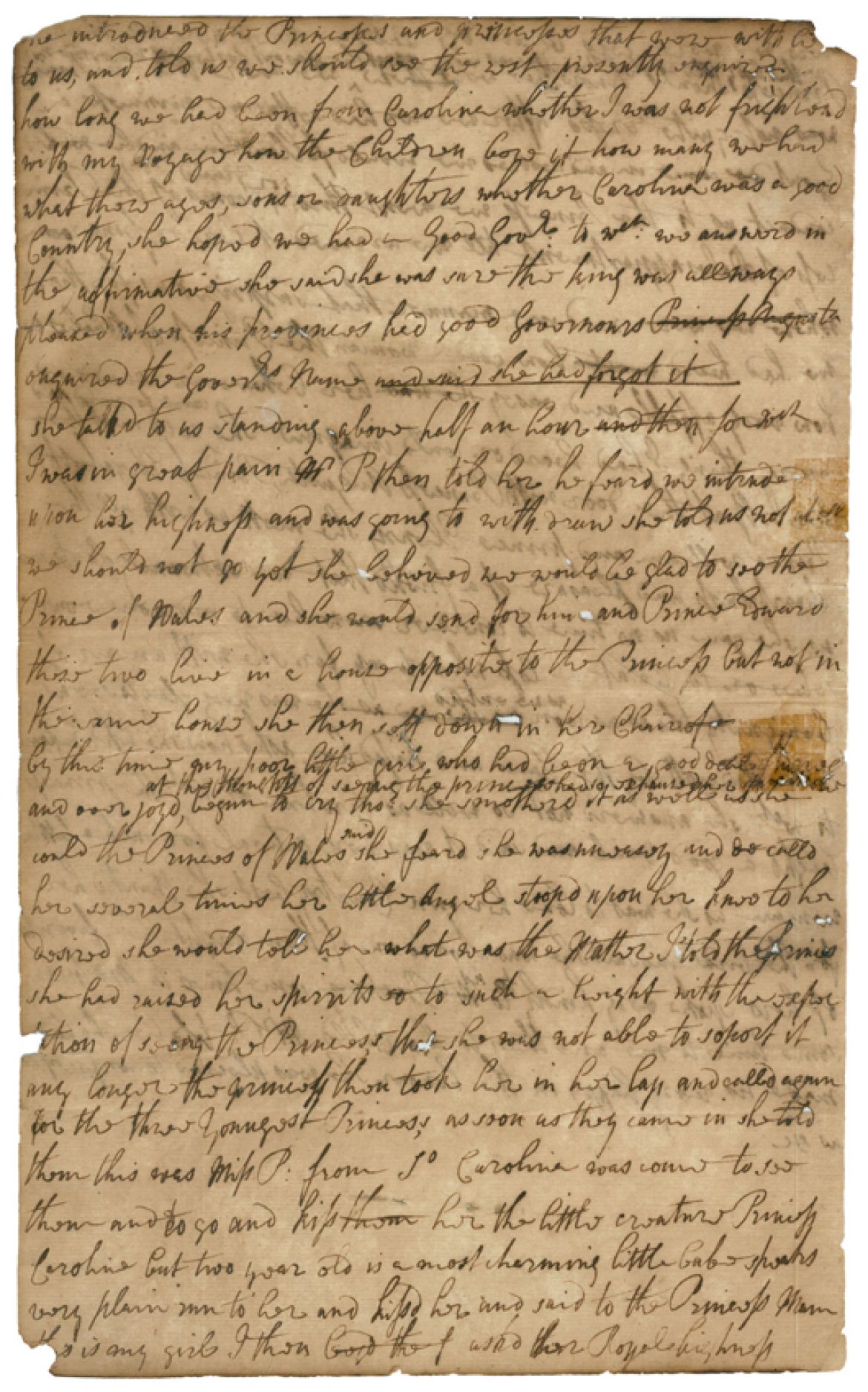 Eliza Lucas Pinckney, Letter, 1753
Eliza Lucas Pinckney (1723-1793) was a remarkable woman who broke gender norms by influencing the colony’s agriculture and business investment plans. She is best remembered for her experiments with indigo and early investment in the indigo market. This letter, written by Mrs. Pinckney, details the Pinckney family’s informal presentation to Princess Augusta (1719-1772), the Dowager Princess of Wales, while the family was living in England during her husband Charles Pinckney’s service as an agent for South Carolina. During the encounter, Pinckney wore a dress made from silk produced on her family’s plantation. 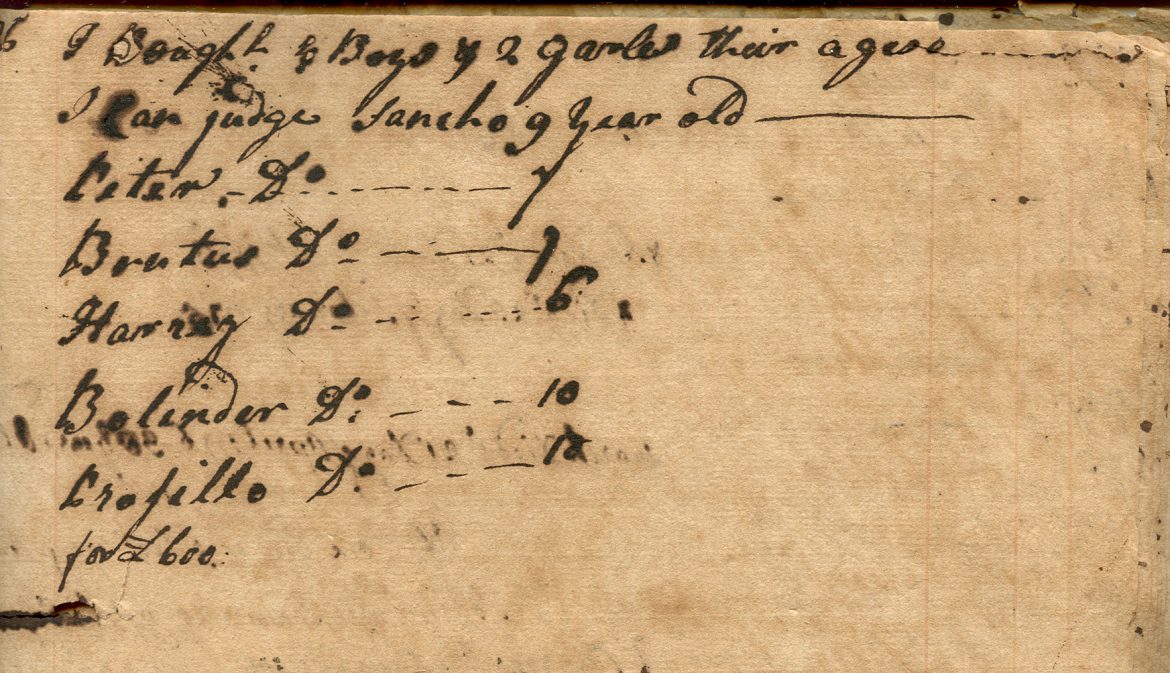 Elias Ball, List of Enslaved, 1756
This list shows the names and ages of six African children purchased by Elias Ball (1706-1786), of Comingtee and Limerick Plantations on the Cooper River, on June 30, 1756 for the sum of £600. At least five of the group had been enslaved in Sierra Leone and transported to Charleston to labor on plantations. Over the course of the 18th century, South Carolina brought in more slaves than any other English colony, importing approximately 100,000 Africans, and had a black majority population by 1715. While most European settlers traveled to the colony for economic opportunities or seeking religious freedom, enslaved Africans were forced to travel to the colony and would face oppression and relentless labor upon their arrival and for generations to come. 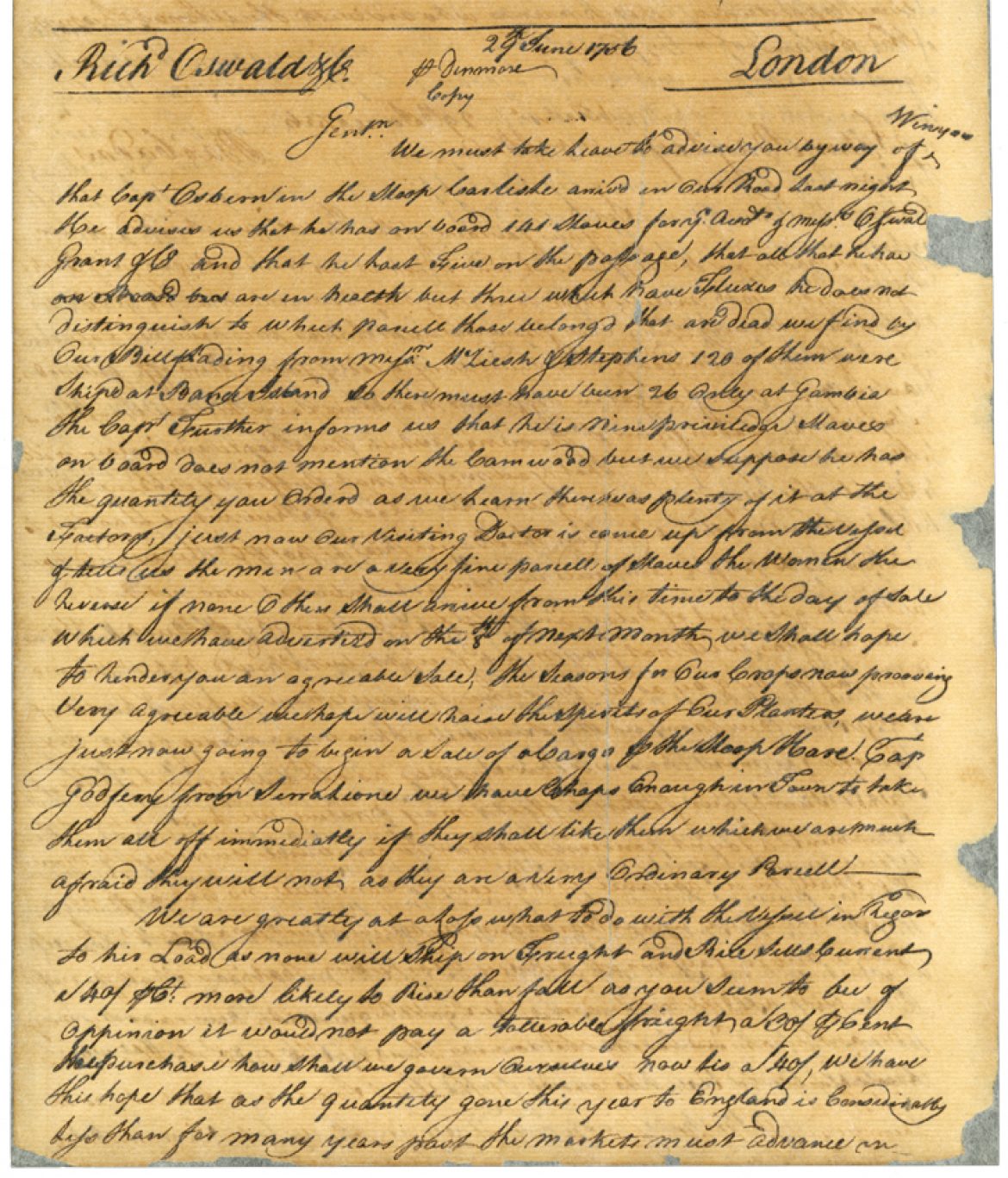 Henry Laurens, Letter, 1756
Henry Laurens (1724–1792) was one of colonial South Carolina’s wealthiest merchants and slave traders. He also owned several plantations, including Mepkin, on the Cooper River. Laurens supported the American Revolution as governor of South Carolina and president of the Continental Congress. The British captured Laurens and imprisoned him in the Tower of London. Released in 1781, he signed the Treaty of Paris that recognized American independence. In this letter to Richard Oswald dated 1756, Laurens’ involvement with the transatlantic slave trade is illustrated as he discusses shipments of enslaved Africans. 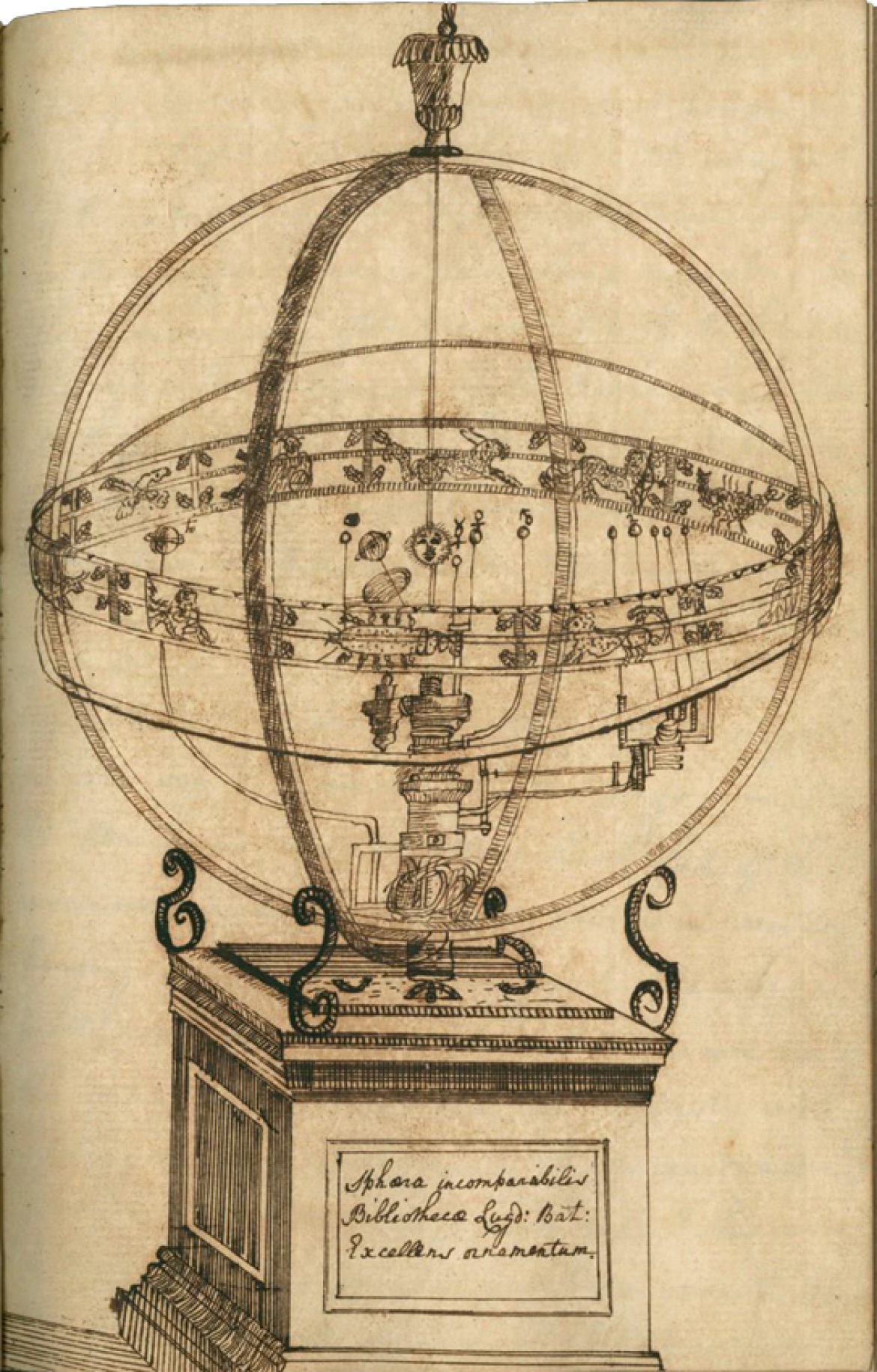 Unknown, Observations of a traveller : on a tour through Holland, Flanders, France & Italia, 1764
In this travel journal, an unknown writer describes a journey through Holland, Flanders, France, and Italy in 1764. The writer details methods of travel by post coach, foot, and boat while also occasionally referencing historical persons and events. The journal also has multiple finely executed drawings from the writer, such as this detailed drawing of an orrery; a mechanical model of the solar system and Zodiac. Observed at the University of Leyden, it was created by Adrian Vroesius and constructed by Nicholai [Nicholas] Stampioen and Bernardi Cloesii [Bernardus Cloesius] in 1711. Many travel journals in the SCHS collections include sketches of sites visited and can offer historians a glimpse into the world witnessed by past generations of South Carolinians. 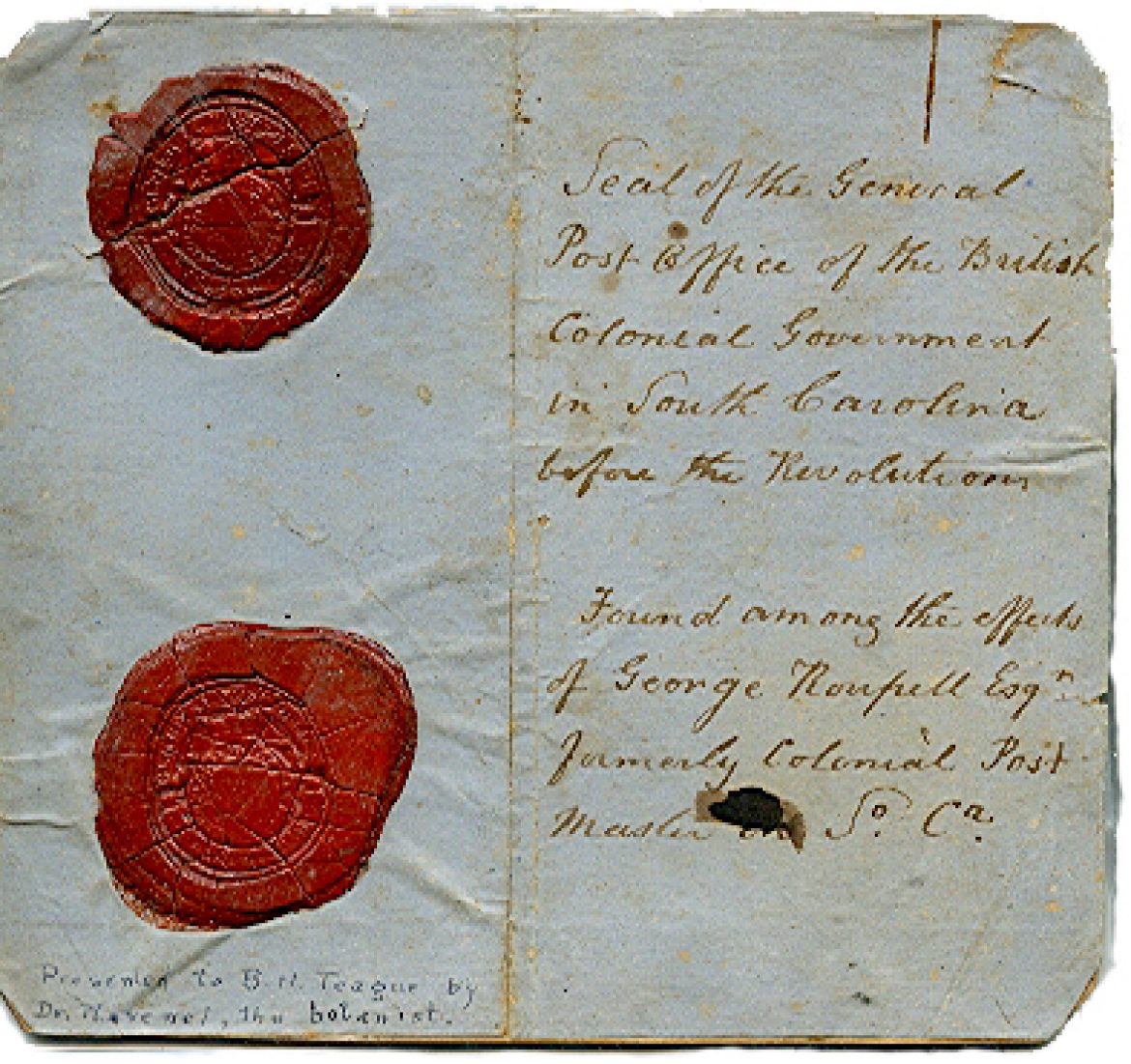 Seal of the Post Office, 1771
This record, affixed with two wax seals bearing the impression of the Seal of the General Post Office of the British Colonial Government, was “found among the effects of George Roupell, Esq.”. Roupell (1727-1794), also an illustrator, draughtsman and politician, was appointed Deputy Postmaster for the southern colonies in 1771 and held office until displaced by the American Revolution in 1775. 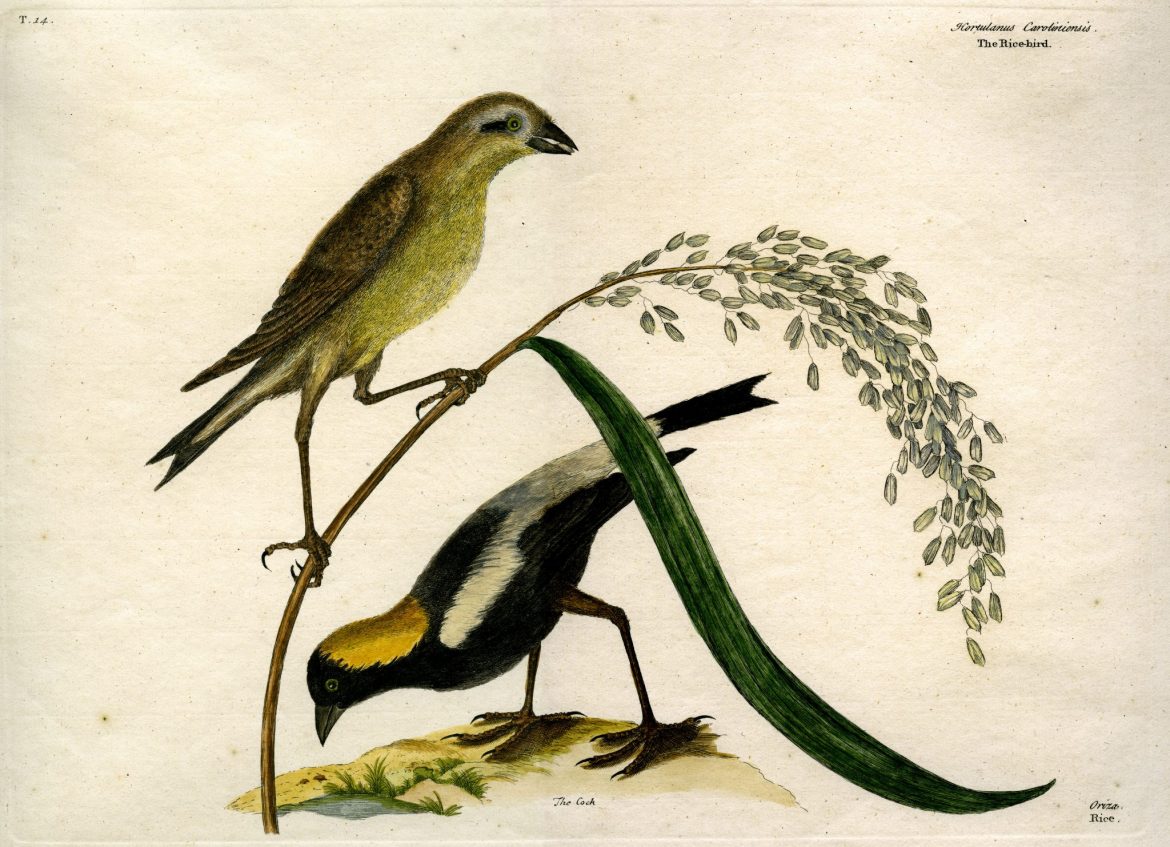 Mark Catesby, Hortulanus Caroliniensis, The Rice-Bird, 1771
Born in Essex, England, Mark Catesby (1683-1749) was an early artist-naturalist of America. He toured Virginia, Carolina, and the Caribbean collecting plant and animal specimens and returned to London to publish his book, "The Natural History of Carolina, Florida and the Bahama Islands... ". Rice birds or bobolinks were destructive pests that fed upon ripening rice crops. Young or elderly enslaved African Americans were tasked with driving the birds away from rice fields.