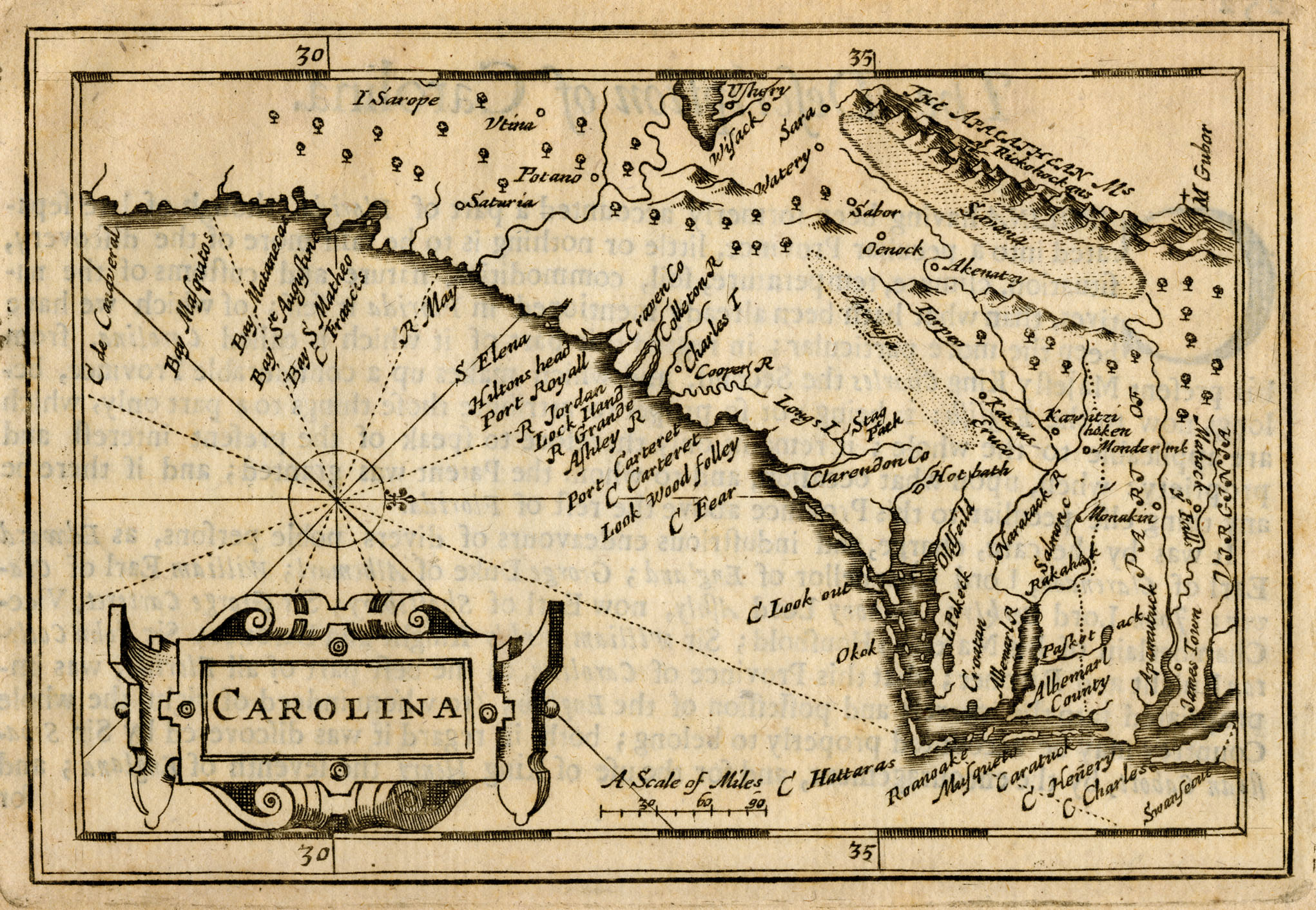 From the Society’s collections, this portion of John Speed’s 1675 map shows the location of Port Royal as well as Charles Town (indicated by the title “Charles T”).

In August of 1669, three ships – the Carolina, the Port Royal, and the Albemarle- set sail from England for the Carolina Province. The fleet was under the command of Captain Joseph West and later, Sir John Yeamans. The ships stopped briefly in Ireland in the hope of attracting more settlers but instead, a few potential colonists changed their minds and disembarked. After forty days at sea, with about 150 people on board, the fleet reached Barbados, where the Albemarle was destroyed by a storm. It was replaced with a sloop, The Three Brothers, and the fleet sailed on to Nevis (one of the Leeward Islands in the West Indies). In Barbados, Yeamans appointed William Sayle governor of the colony. The fleet abandoned the Port Royal and sailed on with the Carolina and The Three Brothers to Bermuda. The Three Brothers was blown off track by a storm. It was replaced by another sloop and the ships sailed to Port Royal Sound, where they landed in March. Only two people died in route to North America.

When they explored the area around Port Royal, the settlers encountered a friendly tribe of Kiawah Indians. The Native Americans explained to the colonists that a location to the north would offer more protection and better land for farming. The settlers also reasoned that it would be further from the hostile Spanish, who were gathered at St. Augustine. The colonists sailed on to the Ashley River in early April. They settled on the west bank of the river on a location known as Albemarle Point. There they founded Charles Town, named for Charles II of England.

The settlers fortified their town and raised crops. The governor of the colony, William Sayle, was nearly eighty by the time they reached Carolina. Sir Yeamans described him as “a man of noe great sufficiency yet the ablest I could then meet with.” One person who was important to the colonists was Indian agent and physician Henry Woodward. He arrived in Carolina in the 1660s and lived among the Indians, studying their culture and language. Through his activity, the colony gained support from neighboring tribes and began trading skins, furs, and slaves.

The following year, Sir John Yeamans arrived from Barbados with additional settlers and slaves. As the settlement grew, residents realized that the peninsula located between the Ashley and Cooper Rivers would be a more desirable location. In the late 1670s, a town was laid out there and some of the colonists relocated. By 1680, the rest of the settlers moved to the peninsula and the town had a population of nearly one thousand residents.