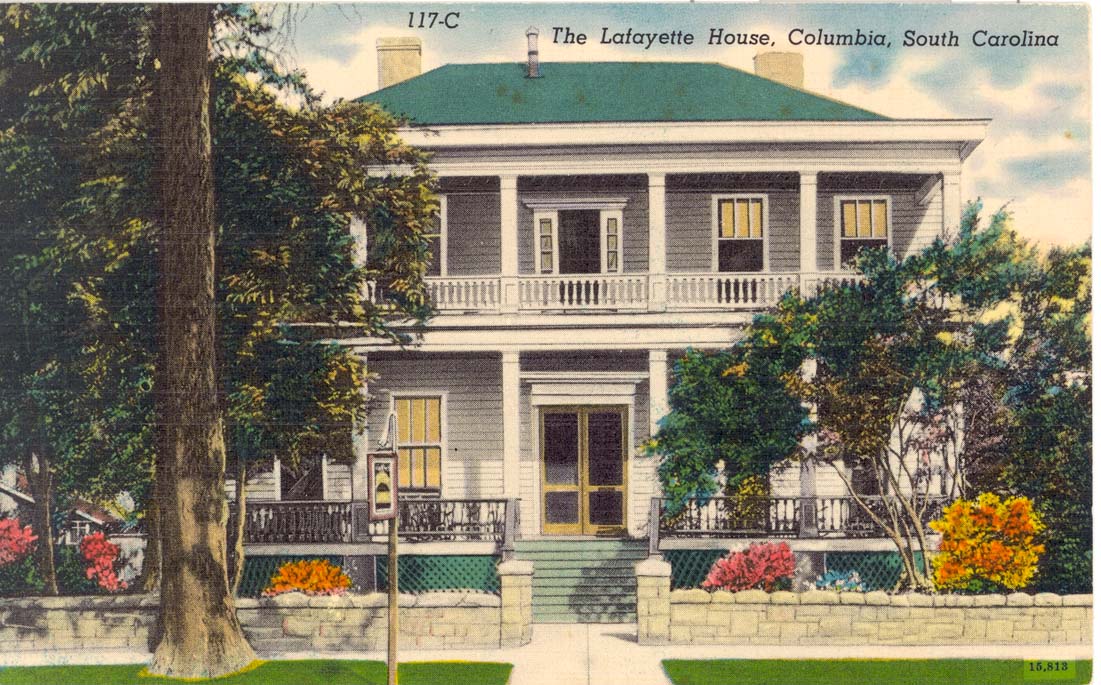 The Lafayette House in Columbia where Washington was entertained during his 1791 tour of South Carolina. From the collections of the South Carolina Historical Society.

In the spring of 1791, President George Washington set out for a tour of the southern states. His goal was to unify the country and to familiarize himself with the economy and geography of the lower south. The first part of the trip focused on the towns along the eastern seaboard with a return route that was inland. In a recent book on the tour, Warren Bingham notes that the President travelled in a white carriage drawn by four brown horses. His tall white charger, Prescott, was available should Washington choose to ride him. There were eight men and eleven horses in the party.

On April 27, the group crossed into South Carolina and headed to Horry County. They spent the night of April 30 in Georgetown. The next day, the President had breakfast with Eliza Lucas Pinckney and her daughter Harriott Horry at Harriott’s Hampton Plantation. By the first week of May, the group reached Charleston where they were housed in a house on Church street. Several lavish parties were planned for the President and he recorded that a visit by “respectable ladies of Charleston” was “as flattering as it was singular.” Sunday, May 8, was his last day in the city. He attended church at both St. Phillips and St. Michaels and then dined privately with Major-General William Moultrie.

After leaving Charleston, the tour headed towards Savannah and stopped near Jacksonboro. They then traveled through Pocotaligo and Purrysburg. Following stops in Savannah and Augusta, the President passed through Edgefield on his way to Columbia. As he approached the statehouse in Columbia on May 22, troops gathered and saluted. He wrote of that place: “Columbia is laid out upon a large scale; but in my opinion had better been placed on the River below the falls. It is now an uncleared wood, with very few houses in it, and those all wooded ones. The State House, which is also of wood, is a large and commodious building, but unfinished.”

After a couple of days in Columbia, Washington headed to Camden, which he described as “a small place with appearances of some new buildings” that was “much injured by the British whilst in their possession.” From there, he traveled up the Old Salisbury Road to Lancaster County. Before crossing into North Carolina, Washington was met by some chiefs of the Catawba nation. He stopped to discuss a treaty with them and wrote that they “seemed to be under apprehension that some attempts were making, or would be made, to deprive them of part of the 48,000 Acres” which was promised to them. After one more night, which he spent with Major Crawford, the President left for North Carolina.