August, 1775: Thomas Jeremiah is Sent to the Gallows 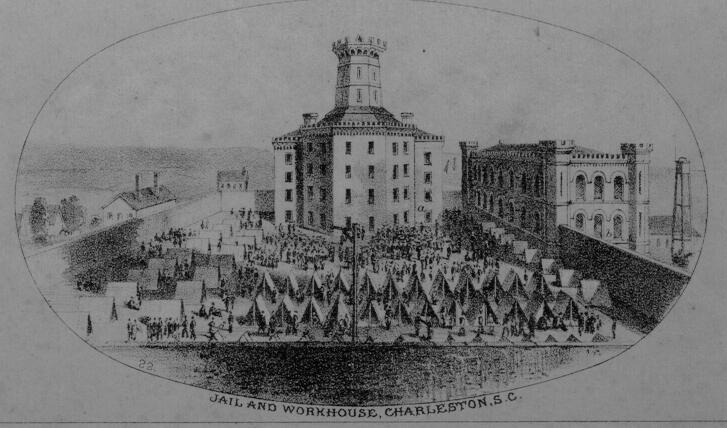 Thomas Jeremiah was imprisoned in the Charleston Workhouse and hanged on its green in 1775. Image courtesy of the Library of Congress.

On the eve of the American Revolution, a free black, Thomas Jeremiah, was brought to the gallows at the green across from the Charleston Workhouse. He was convicted of plotting to incite a rebellion of enslaved individuals in support of the British. As the authorities tightened the noose, Jeremiah addressed his accusers. According to the newspapers, he stated that “God’s judgment would one day overtake them for shedding his innocent blood.” It was also reported that he “met death like a man and a Christian.” After he was dead, the body of Thomas Jeremiah was burned as a warning to others who might incite rebellion.

Jeremiah was a harbor pilot in Charleston who ran a fish market and served from time to time as a firefighter. He gained a small fortune and was a slaveholder. Four years prior to the hanging, he was convicted of assaulting a white ship captain, but Lieutenant Governor Bull, citing Jeremiah’s public deeds, pardoned him. He was not so lucky in 1775.

Throughout the spring of ’75, rumors circulated throughout the lowcountry about a plot by the British to use enslaved African Americans to attack local Patriots. Jeremiah’s familiarity with firefighting and his ability to navigate Charleston’s harbor made him the prime suspect in connecting the British and the enslaved populace for this purpose. Henry Laurens, a wealthy merchant and patriot leader, considered Jeremiah “a forward fellow, puffed up by prosperity…and grown to an amazing pitch of vanity and ambition.” Laurens was convinced of Jeremiah’s guilt. The governor of the colony, Lord William Campbell, did not agree with Laurens. Campbell tried to step in late in the proceedings to save Jeremiah but was warned not to interfere. According to the Governor, if he did issue a pardon, local citizens would lynch Thomas Jeremiah on Campbell’s doorstep.

In a letter to Lord Dartmouth, his superior, written after the hanging, Governor Campbell wrote: “My blood run cold when I read on what grounds they had doomed a fellow creature to death.” He noted that he had “expressed to the justice in the strongest terms my sense of the weakness of the evidence.” With great frustration, Campbell exclaimed: “I could not save him my Lord!” We will probably never know if Jeremiah was innocent, but the incident illustrates the fears held by Patriots that the British would incite the enslaved population to rebel. Several historians note that Thomas Jeremiah was the first South Carolinian killed during the American Revolution.