Jonathan Jasper Wright was born in Pennsylvania on February 11, 1840. The son of a runaway slave, he was raised on a family farm in Springville, Pennsylvania. Wright studied with a local minister and attended Lancasterian Academy near Ithaca, New York. He then began teaching and reading law. In 1864 he applied for a license to practice law in Pennsylvania, was refused, and accepted a position with the American Missionary Association. That organization sent him to the Beaufort area to teach African American soldiers, many of them recently freed from slavery. 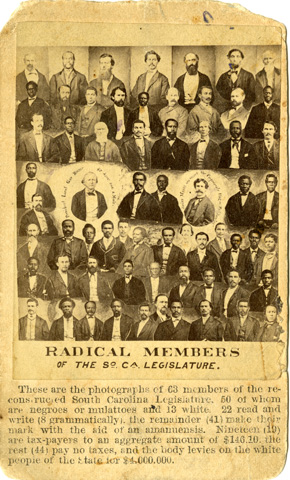 In 1866 Wright returned to Pennsylvania briefly to obtain his license to practice law. He was successful and in 1867 the Freedman’s Bureau sent him back to Beaufort to assist formerly enslaved persons with legal concerns. Wright was the first African American to practice law in South Carolina. The 1868 election was the first in South Carolina’s history that allowed African American men to vote. Wright served in the 1868 Constitutional Convention where he supported public education and a liberal homestead exemption. He gained notoriety for his participation in the convention and was elected to the state senate from Beaufort County that same year.

With eighty-eight African American members, South Carolina’s 1868 state legislature was the first in the country with a black majority. However, the tax code implemented by the legislators was violently opposed by most whites in the state. Lies and insults circulated concerning the members. Among the most publicized was an image of “Radical Members” that claimed only nineteen were taxpayers, which has since been disproved by the census and other historical records.

On February 1, 1870, the General Assembly elected Wright to be an associate justice on the State Supreme Court. This made him the first African American to serve as a judge in any state or federal court in the country. He served for almost seven years, writing over eighty opinions. Most of his cases dealt with property or debt, but occasionally Wright addressed the rights of freedmen and the issue of discrimination. In one case, Ex Parte Norris, Wright reversed his earlier opinion on the legitimacy of the election of Governor Wade Hampton. When Democrats launched impeachment proceedings against him in 1877, Wright resigned.

Following his resignation from the court, Wright moved to Charleston and opened a law office on Queen Street. He became the chair of the law department of Claflin College and trained young lawyers. He died from tuberculosis in 1885 and is buried at Calvary Episcopal Church in Charleston. Chief Justice J. Clay Smith, a law professor at Howard University, has noted that Wright possessed “one of the finest legal minds” of the Reconstruction era.