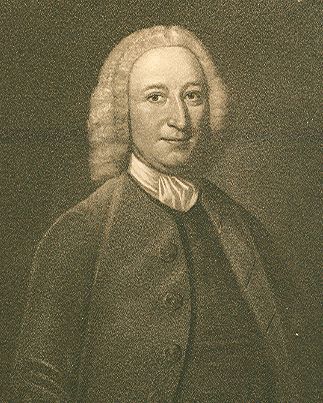 Portrait of Alexander Garden. From the Collections of the South Carolina Historical Society.

Smallpox, a highly contagious disease, was a constant threat to colonists in South Carolina. Most of the epidemics that ravaged the colony came from ships that docked in Charleston. However, the smallpox epidemic of 1760 is believed to have been brought to the area by soldiers returning from a battle with the Cherokee Indians in the northwestern portion of South Carolina. At the time, Charleston had a population of about four thousand people. The epidemic of 1760 infected over one-half of the residents and ultimately killed nine hundred people in the city.

This dreaded disease killed and scarred millions of people from the late seventeenth century to 1977, when it was finally eradicated by vaccination and isolation of infected persons. It caused fever and eruptions in the throat and on the skin. In severe cases, the virus attacked internal organs and caused hemorrhaging. Killing close to twenty percent of those infected, smallpox left survivors with “pock marks” and sometimes blinded them.

Twenty-two years prior to the 1760 epidemic, another deadly smallpox outbreak had seized the area. The epidemic of 1738 was most likely brought to the colony by sea and marked the first use of inoculation in South Carolina. James Kilpatrick recorded that he inoculated between 800 and 1,000 people and only eight died. In 1760, another Scotsman, Alexander Garden, followed in Kilpatrick’s footsteps and inoculated over 2,000 people in a two-week period. Despite many who opposed the procedure as an interference with nature, Garden saved thousands of lives.

A native of Bairse, Scotland, and former surgeon’s first mate in the Royal Navy, Garden studied medicine and botany at the University of Edinburgh but did not have the funds to complete his studies. By 1752 he was in Charleston assisting Doctor William Rose. An avid botanist and zoologist, Garden began to collect species and corresponded with Carolus Linnaeus, the naturalist who developed a new classification system for plants and animals in the eighteenth century. Garden shipped plant and animal specimens to Linnaeus, including dried fish skins and reptiles preserved in wine. A major contributor to the natural history of North America, Garden is known for the plant Gardenia jasminoides, which was named for him. At the end of the Revolution, Garden, who was a Loyalist, was banished from the country. He ended his life in London and is rarely credited for the lives he saved in Charleston in 1760.