This July marks the 17th anniversary of the opening of the Arthur Ravenel Jr. Bridge. The bridge, which connects downtown Charleston to Mount Pleasant, officially opened to traffic on July 16, 2005, following a week-long celebration. The bridge is named after Arthur Ravenel Jr., the former US Congressman and state senator who campaigned for the funding needed to construct the bridge.

By the late 1970s, Grace Bridge was declared structurally unsound. Additionally, the two bridges were not tall enough to allow for the passage of modern container ships. The state of South Carolina deemed it too expensive to replace the bridges, so the Grace and Pearman Bridges remained in use.

Things began to change when the Grace Bridge scored a 4 out of 100 on a safety test in 1995. In an oral history interview with the South Carolina Historical Society, Arthur Ravenel Jr. recalls, “we got a report from a consultant that the highway department had hired to do a feasibility study on the Grace Bridge. … And I’ll never forget what the gentleman said. He says, … ‘both structurally and functionally…a perfect bridge is 100.’ He says, ‘The Grace Bridge, in both categories, is a 4!’ And everybody gasped!” Concerned by this report, Senator Ravenel returned to the state senate on the single-issue platform of raising funds for a new bridge. Thanks to partnerships with local, state, and federal entities and the creation of the SC Infrastructure Bank, Senator Ravenel helped secure funding for the bridge by 2001. The total cost of the bridge was about $700 million.

Following 4 years of construction, the Arthur Ravenel Jr. Bridge Opening Celebration took place from July 9-16, 2005. On July 9 and 10, over 50,000 people visited the bridge for an open house event and had the opportunity to walk on the bridge for the first time. Other events included a black-tie gala fundraiser held on the bridge, an official bridge lighting ceremony, a mile-long display of fireworks across the Cooper River, and a dedication ceremony. 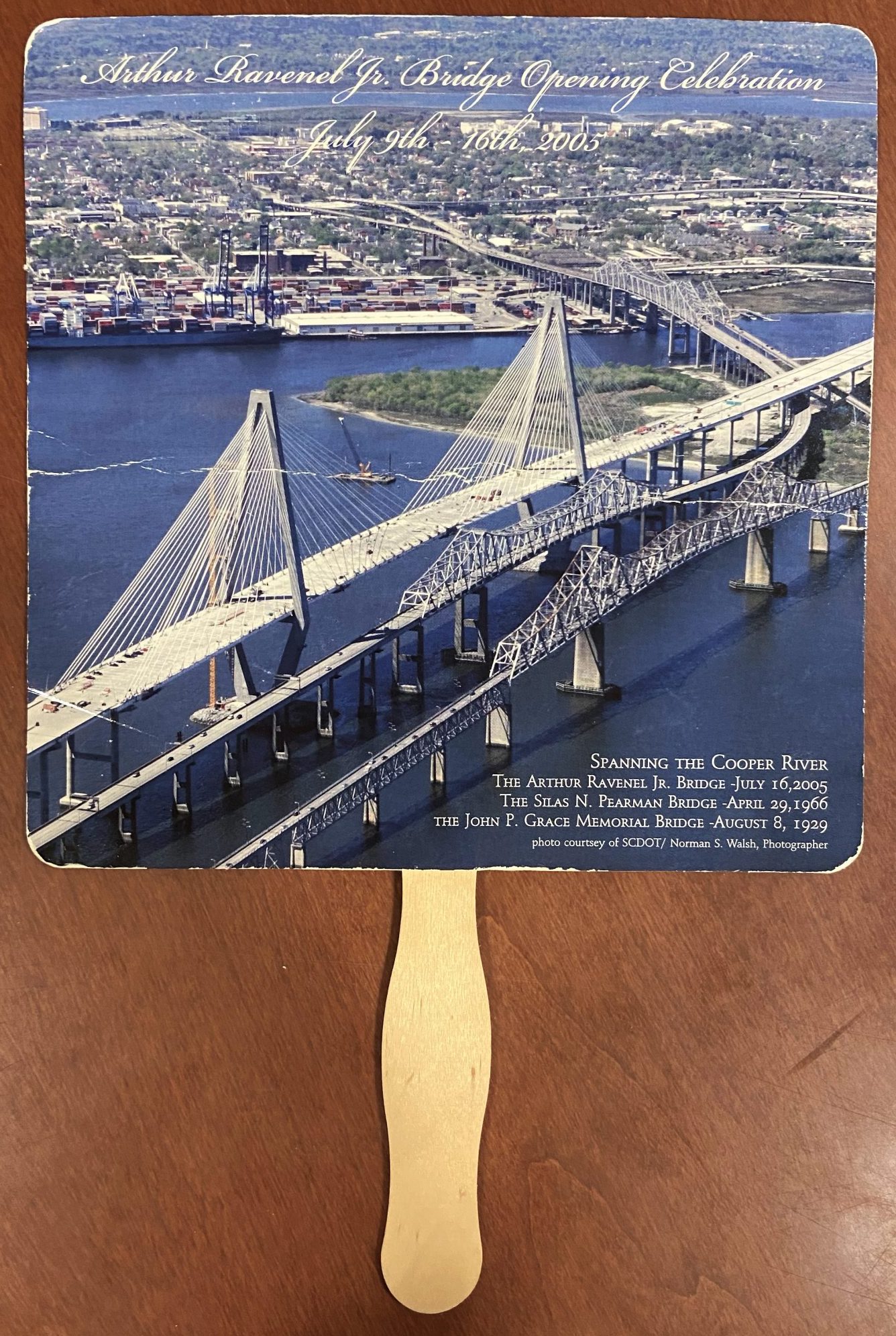 Seventeen years later, the bridge is one of the most recognizable features in the city and popular with locals and visitors alike. Over 80,000 cars and hundreds of walkers, runners, and cyclists cross the bridge daily. On the legacy of the bridge, Senator Ravenel said, “… and with tongue in cheek, I tell people it’s the only thing, which in my political experience, it’s the only thing that’s ever been done in the greater Charleston area that no one complains about! Everybody loves the bridge.”

Pictured: A hand-held fan given out during the celebration that list the schedule of events. From the Arthur Ravenel, Jr. papers, 1838-2015, South Carolina Historical Society Collections.