June, 1737: A Revolutionary Heroine is Born 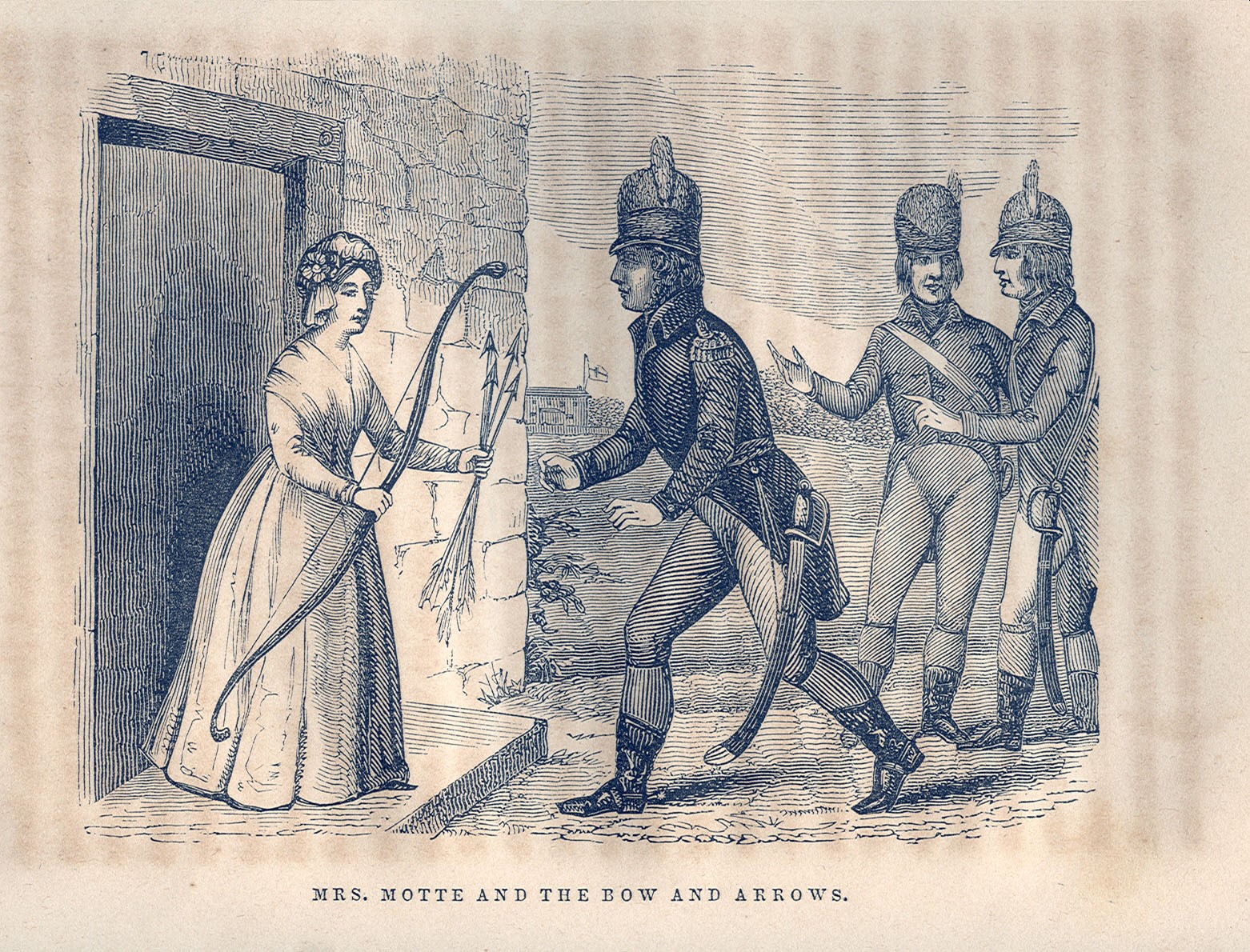 Sketch of “Mrs. Motte and the Bow and Arrows”

Rebecca Brewton was born at her father’s plantation on the Santee River on June 15, 1737. Her father, Robert, was a wealthy goldsmith and his father, Miles, came to the colony from Barbados. Rebecca’s brother, also named Miles, was six years older and would become a prosperous slave trader and merchant. Her older sister Frances married Colonel Charles Pinckney. When she was twenty-one, Rebecca married Jacob Motte, Jr., the son of South Carolina’s public treasurer.

The Mottes split their time between a townhome in Charleston and Fairfield Plantation on the South Santee River. Rebecca gave birth to seven children, but only three daughters lived to adulthood. Rebecca’s brother Miles gained vast wealth prior to the Revolution and built a lavish mansion in Charleston. He also owned several plantations. In 1775, Miles and his family perished at sea on a trip from Charleston to Philadelphia. Rebecca and her sister Frances inherited his townhouse and plantations.

Jacob Motte fought in the Battle of Fort Moultrie and the couple supported the Patriot cause. In 1779, their daughter Elizabeth married Thomas Pinckney. For part of the Revolution, Rebecca and her daughters lived in her late brother’s mansion on King Street. In 1780 the British claimed the house for their headquarters and Rebecca moved to Mt. Joseph plantation, on the Congaree River. The Motte’s contributed food to the troops from their plantations and for a time the house at Mt. Joseph was used as a hospital for wounded soldiers. Rebecca’s husband became sick and died in 1780. As his widow, she inherited their townhome, Fairfield Plantation, and 244 slaves. In June of that year, the British occupied Belleville, a plantation down the river from Mt. Joseph, where Rebecca was staying.

In1781, British troops led by Captain McPherson seized Mt. Joseph and occupied the main house. Rebecca, her family, and their enslaved servants moved to the overseer’s house. That May, General Nathanael Greene sent Francis Marion and Henry Lee to capture the house and grounds, which was referred to a “Ft. Motte.” After several failed attempts to remove the British, the Patriots decided to burn the main house. Rebecca agreed to sacrifice her home and even provided arrows which could be lighted to set the structure ablaze. The British surrendered and, legend has it, aided in the effort to extinguish the fire.

Due to the land and homes left to her by her brother and husband, Rebecca was one of the wealthiest people in South Carolina during the Revolutionary period. After the conflict ended, she and her son-in-law, Thomas Pinckney, built another plantation, Eldorado, near the Motte’s first home at Fairfield. She spent the remaining years of her life at Eldorado with her daughter Frances. Rebecca Motte died in 1815 and is buried in St. Philips Church cemetery in Charleston.