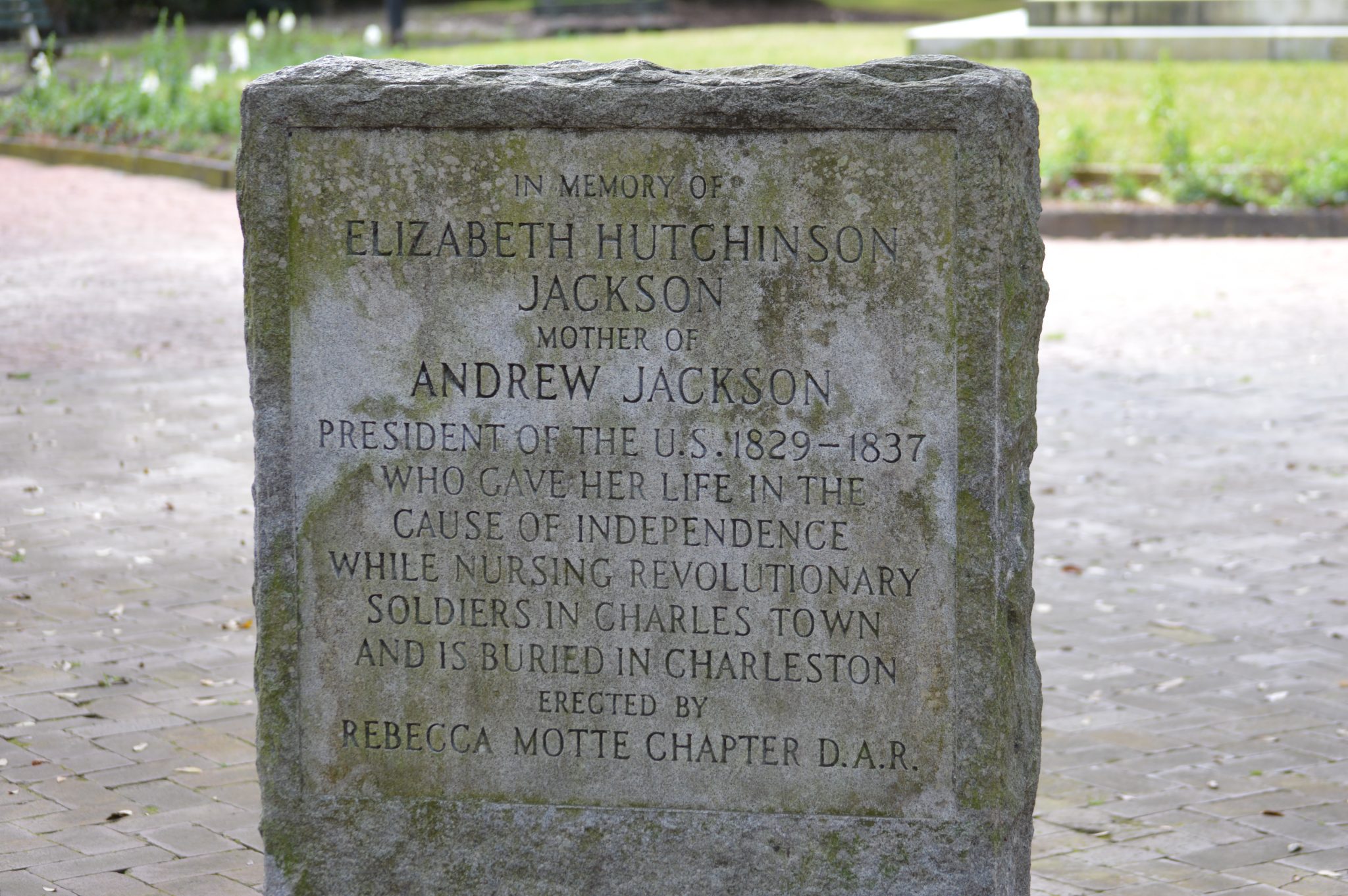 Elizabeth Hutchinson was born in Ireland as was her husband, Andrew Jackson, Sr. They married around 1761 and emigrated to America four years later. They settled near the Waxhaws, on the border of South and North Carolina and obtained 200 acres of land at Twelve Mile Creek, which ran off of the Catawba River. There was a Presbyterian Church, a general store, and a few homes nearby. Andrew Jackson, Sr. died unexpectedly at twenty-nine years old just three weeks before his youngest son, Andrew, was born.

Elizabeth’s three sisters left Ireland with their families around the same time as she and her husband emigrated. One of her sisters, Jane, was married to James Crawford. They lived near the Jacksons and Jane was in poor health. A few weeks after Andrew was born, Elizabeth and her three sons moved in with the Crawfords. Elizabeth kept house for the Crawfords and nursed her sister, who has been described as an invalid.

Elizabeth frequently told her sons stories of their grandfather, Francis Hutchinson, and his participation in the Irish resistance against the British. Once the Revolution started, the boys were anxious to join the struggle. The oldest son, Hugh, enlisted first and died from heat exhaustion during the battle of Stono Ferry in 1779. That same year, thirteen-year-old Andrew and his brother Robert joined a local militia.

In 1781, both Andrew and Robert, were captured by the British. Andrew refused to polish a British officer’s boots and was permanently scarred when the man attempted to slash his face with a sword. Both boys contracted smallpox while in prison in Camden. Eventually, Elizabeth was able to have them included in a prisoner transfer and the two boys were freed. Robert died on the trip back to the Waxhaws. Hugh and Robert were buried along side their father in the Old Waxhaw Presbyterian Church cemetery.

That same year, Elizabeth accompanied several ladies from her community to Charleston, which was occupied by the British. They wanted to nurse patriot prisoners of war who were being held on ships in the harbor. Two of Elizabeth’s nephews were among the prisoners. During her time in Charleston, she contracted cholera and died in November. She was buried in an unmarked grave and her belongings were sent back to her youngest, and only surviving son, Andrew.

The exact location of Elizabeth’s burial site has never been discovered. There are three monuments that honor her. One was donated by members of the U.S. Military and located on Charleston’s King Street. It has since been moved to the campus of the College of Charleston. A second monument was placed in the Old Waxhaw Cemetery in 1949. In 1954 a third monument was erected to Elizabeth Jackson in Charleston’s Washington Park, right outside of the Fireproof Building.