Following the election of many states-rights advocates to South Carolina’s legislature, the state responded to Henry Clay’s tariff of 1832 by calling for a convention to denounce the tax. At the meeting in Columbia, the delegates passed the South Carolina Ordinance of Nullification on November 24, 1832. That act nullified, or voided, the tariff within the borders of the state. In addition, the ordinance stated that any action by Congress to force South Carolina to collect the tariff would result in secession from the union. 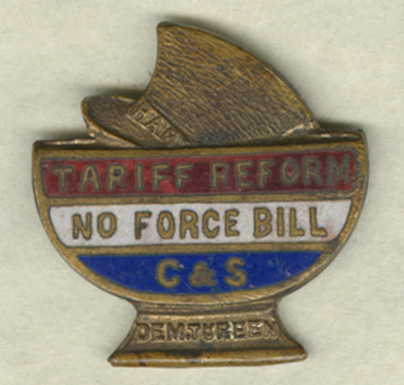 A “Nullification Button” that called for tariff reform as well as an end to President Jackson’s Force Bill. From the Collections of the South Carolina Historical Society

This event was the culmination of nearly twenty years of conflict between northern industrial interests and the agrarian south. High tariffs on foreign products benefited manufacturers but frequently caused a downturn in the exportation of agricultural products. While a tariff on cotton textiles was helpful to U.S. cloth manufacturers, it discouraged the use of American cotton by other countries. In 1828, Congress passed a high tariff on incoming products and southerners labeled it the “Tariff of Abominations.” That year, South Carolina’s John C. Calhoun anonymously penned two articles that are called the “South Carolina Exposition and Protest.” These laid out the claim that nullification, or “interposition or state veto,” should be allowed, giving states the power to decide that federal legislation is unconstitutional. The papers also instructed states on the procedure of nullification. Under Calhoun’s theory, it was understood that secession was an option if nullification was ineffective.

During the time that Calhoun was outlining the procedure of nullification and popularizing the idea of states rights, he was serving as Vice President to Andrew Jackson. The topic was part of a lively debate in the Senate between Robert Hayne of South Carolina and Daniel Webster of Massachusetts. Opinions in Washington grew so heated that Mrs. Calhoun moved her family back to their home at Fort Hill in Pendleton, South Carolina. From there, Calhoun wrote the “Fort Hill Address: On the Relation which the States and General Government Bear to Each Other.” In that document, he declared that “This right of interposition … be it called what it may, — State-right, veto, nullification, or by any other name, — I conceive to be the fundamental principle of our system … and I firmly believe that on its recognition depend the stability and safety of our political institutions.”

Henry Clay’s 1832 tariff decreased the tax on some products but did not go far enough to sooth the planters of South Carolina. The state’s Ordinance of Nullification, with its threat of secession, was a problem for the recently re-elected President, Andrew Jackson. He instructed Lewis Cass, Secretary of War, to prepare the country for war and gave several speeches against the theory of nullification. He also asked Congress to pass the Force Bill, giving him power to enforce the law in South Carolina if necessary. In response, Calhoun resigned as Vice President. However, while he spoke of war, Jackson worked behind the scenes to calm the waters. He quietly supported another bill that called for reduction of the tariff. On March 2, 1833, the tariff was reduced, a truce was established, and South Carolina rescinded the Ordinance of Nullification.