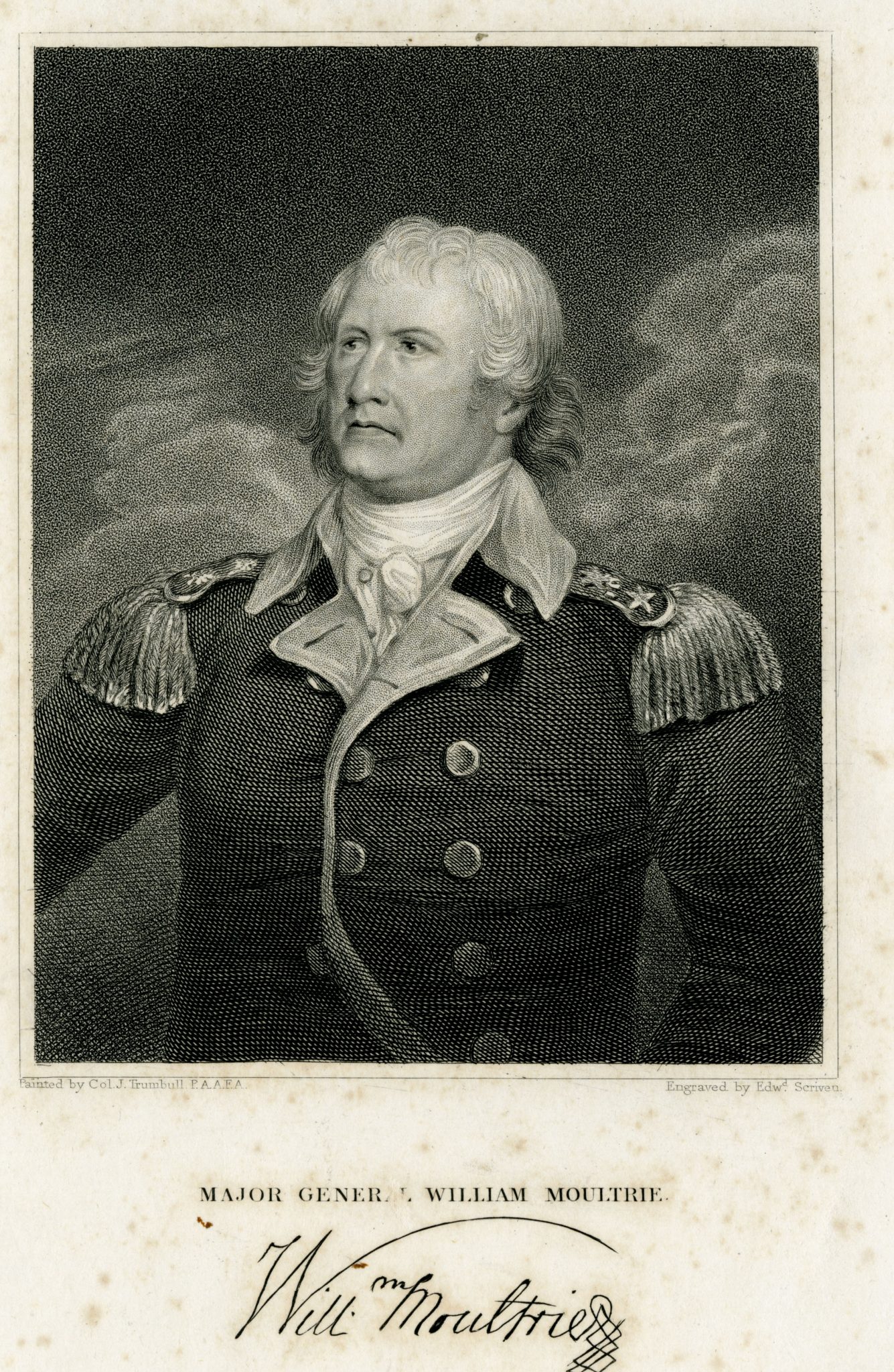 Portrait of William Moultrie. From the Collections of the South Carolina Historical Society.

On November 23, 1730, William Moultrie was born in Charleston.  His mother was Lucretia Cooper and his father, John Moultrie, was a physician.  We don’t know much about Moultrie’s early years but do know that in 1749 he married Damaris Elizabeth de St. Julien of St. John’s Berkeley Parish.  Moultrie’s new wife was a descendant of French Huguenots and her family owned a large plantation. After the wedding, Moultrie obtained a plantation of over a thousand acres.  When he was twenty-one Moultrie was elected to the South Carolina Commons House of Assembly in 1752.  He served nearly every year as a representative of several lowcountry parishes.  He and Damaris Elizabeth had three children, but one died as an infant.

In June 1776, the British attacked Charleston.  Moultrie defended Fort Sullivan against the naval bombardment and saved the City.  His efforts made him a national hero and he was promoted to brigadier general.  His military career is highlighted by a number of successful campaigns.  In February 1779 he fought the Battle of Port Royal Island which removed the British presence in the area around Beaufort.  In that same year, he once again defended Charleston by holding off the British as they moved up the coast from Georgia.  In 1780 the British returned to South Carolina.  Moultrie was serving as second in command to General Benjamin Lincoln.  Over Moultrie’s objections, Charleston surrendered to the British and he was imprisoned.  Later, the British sent Moultrie to Philadelphia, where he was exchanged for British general John Burgoyne in 1782.  Moultrie then returned to duty and served until the end of the war.

In 1785 and 1792, Moultrie was elected Governor of South Carolina.  He also served in the state senate and state constitutional convention.  After his second term as governor, he left political life and retired to his plantation.  In 1802 he published Memoirs of the American Revolution, which is a well-known source on the war.  He died in 1805.  He is remembered as a man of honor and duty.  During his imprisonment in Philadelphia, the British offered Moultrie a position in their own military and command of a regiment in Jamaica if he would change sides.  Moultrie refused, writing that not even “the fee simple of that valuable island of Jamaica should induce me to part with my integrity.”  Moultrie is also credited with designing the nation’s first battle flag.  The state flag of South Carolina is based on the design of the flag he created to fly over Fort Sullivan in 1776.