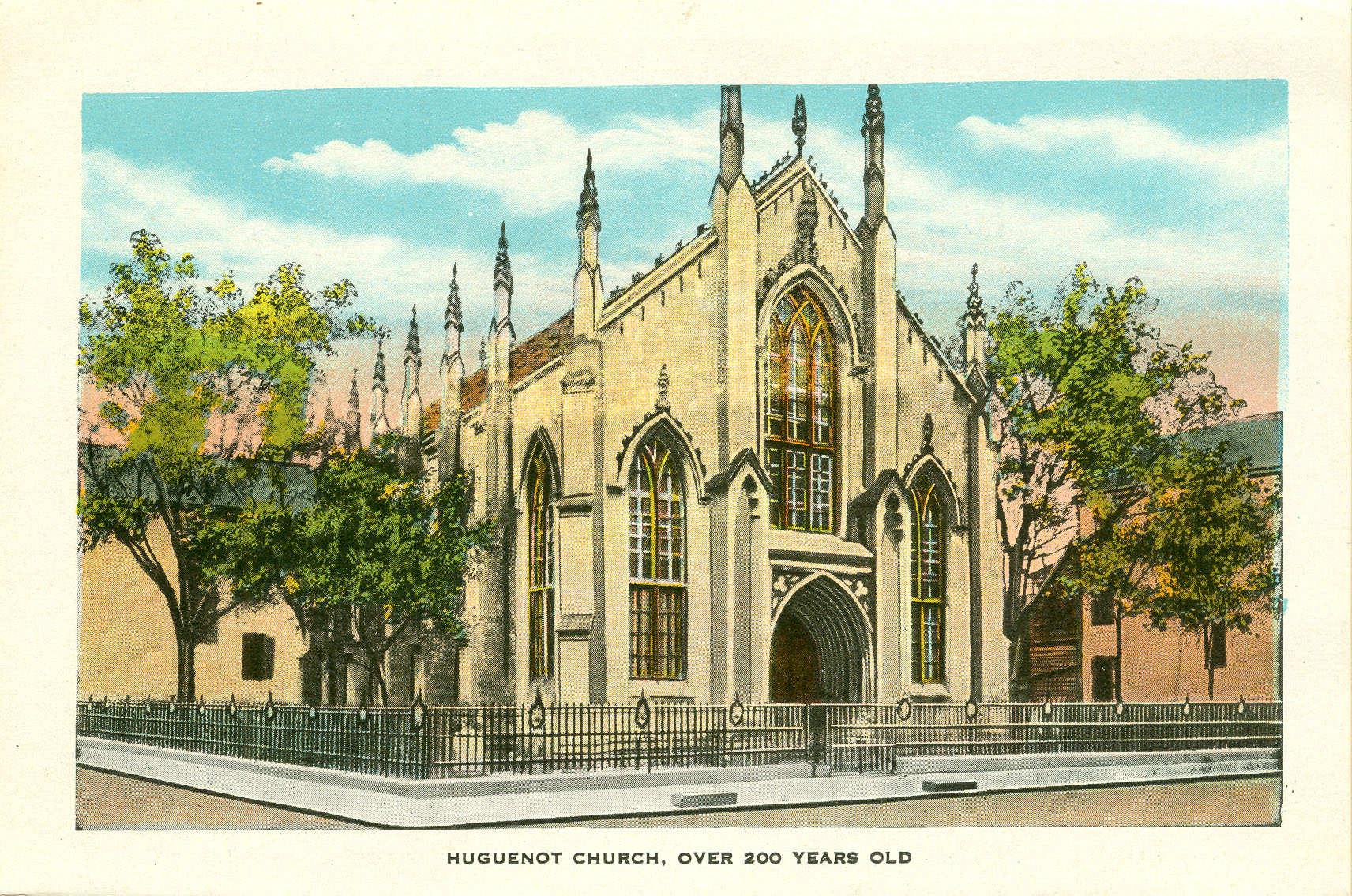 The Huguenot Church in Charleston was built in 1844, but the congregation dates to 1680. From the Collections of the South Carolina Historical Society.

In the 1560s, the number of Protestants who followed the Calvinist form of religion, or Huguenots, was increasing in France, particularly in the southern and western regions.  But the Wars of Religion (1562-1598) diminished their number and many fled the country.  Motivated by the opportunity to thwart Spain’s settlement of the New World as well as to create a haven for Huguenots who wanted to escape their homeland, the French government agreed to establish a colony in South Carolina.  In 1562, the explorer Jean Ribaut sailed with 150 men to the coast of Carolina, where they discovered an outstanding harbor and named it Port Royal.  They built a fort on Parris Island, which was named Charlesfort.  Twenty-eight men were left at the fort when Ribaut returned home.  Within months, the remaining men faced starvation and those who were able sailed home.

The passage of the Edict of Nantes in 1598 brought an end to the Wars of Religion and granted religious and civil rights to Protestants in France.   The Huguenot movement waned during the seventeenth century and in the 1670s and 1680s, Louis XIV made religious reunification a national issue.  At first, Huguenots were denied the right to gather outside their churches or hold daytime funerals.  By the 1680s, provinces allowed the use of force for religious conversions.  On October 18, 1685, the Edict of Nantes was revoked and French Huguenots could either convert to Catholicism, face life in a prison or convent, or flee the country.  At this time, there were about 800,000 Huguenots in France and nearly one-fourth of them left the country.

While most of the Huguenots that left France went to European countries, a few did immigrate to the colonies. In South Carolina, the Lords Proprietors promoted settlement by Huguenots, hoping that they could assist with the production of cash crops such as wine, olives, and silk. In the ten years after the Edict was revoked, an estimated fifteen hundred Huguenots came to South Carolina. Many of the Huguenots who settled in South Carolina during this time were merchants and craftsmen.  Some made the area around Goose Creek their home, but the majority founded churches in three communities in the Lowcountry.  An important Huguenot congregation was founded in 1680 in Charleston while several of the French immigrants settled on the shores of the Cooper and Santee Rivers.  According to Walter Edgar’s South Carolina: A History, Carolina Huguenots spoke and wrote in French until about 1720.  After that, they began to intermarry with English settlers and many joined the Church of England.  There were other ways, however, such as major place and family names, that Huguenot heritage remained intact.