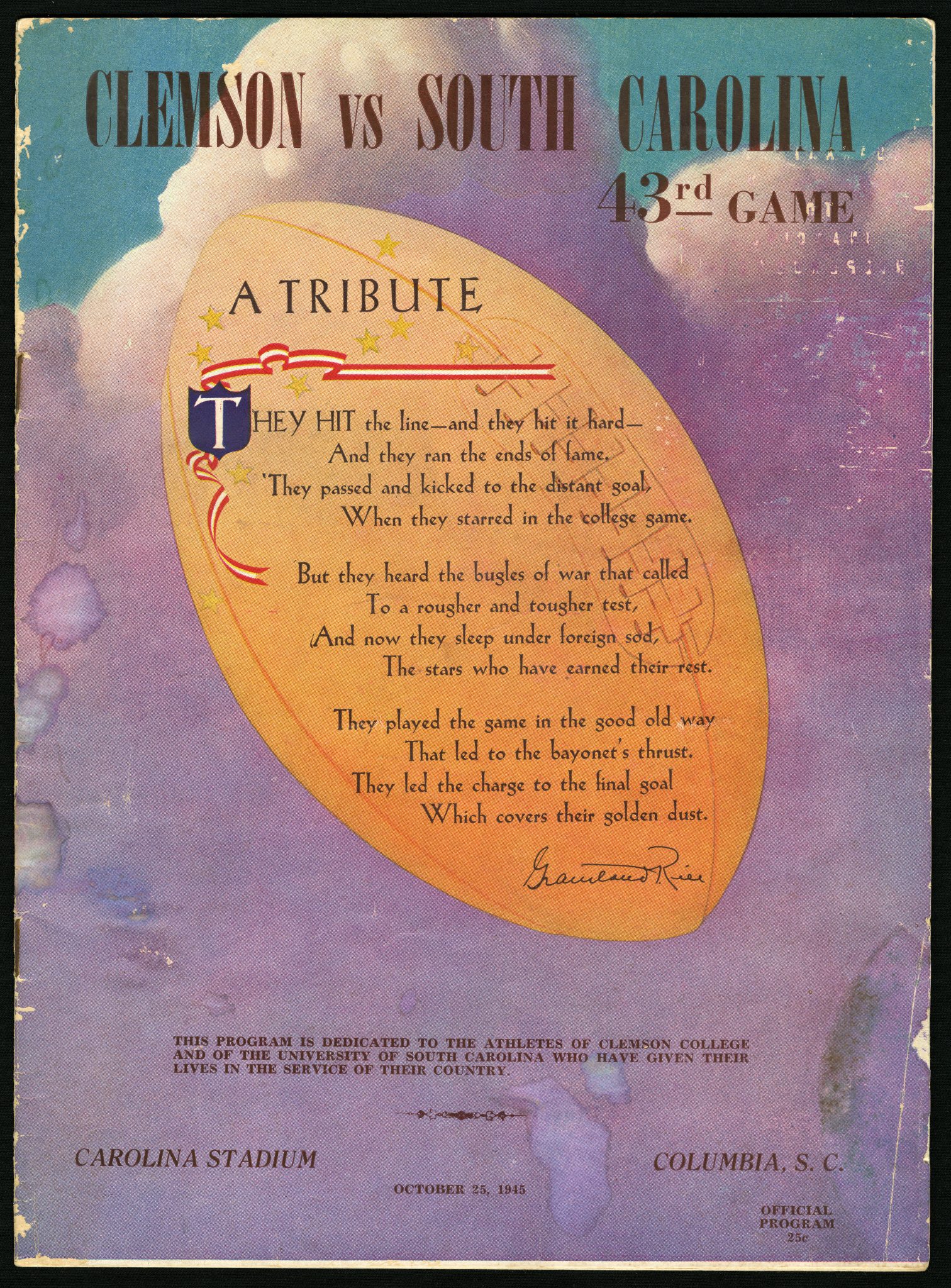 The cover of the program for the 1945 Big Thursday Game had a special tribute to former players who were fighting in World War II. Courtesy of the South Carolina Historical Society.

On October 22, 1959, the last “Big Thursday” football contest between Clemson and South Carolina was played. The tradition began in 1896.  That year, South Carolina College faced Clemson College at the state fairgrounds in Columbia on Thursday, November 12th.  Following that, the teams met each fall, always on Thursday, with the exception of seven years between 1902 and 1910. There was a riot following the contest in 1902 and the game was suspended.  But in the years after 1910, the popular event, still held on a Thursday, was known as the State Fair Classic and attracted thousands of fans.

The popularity of the event grew along with the institutions as they transitioned from colleges into universities. In 1934, the University of South Carolina constructed a new stadium.  The arena could seat 17,000 and was adjacent to the state fairground.  Each year the game was played at that location and the crowds steadily increased.  By 1957, the number in attendance was estimated at 44,000.  As attendance and enthusiasm grew, several traditions were established.  Each year on the Tuesday before the game, Clemson students held a mock funeral for the University of South Carolina’s Gamecock on their campus.  In Columbia, the Clemson Tiger was burned the night before the game.

The event became so popular that schools and businesses in Columbia and across the state closed for the day.  Those in attendance dressed in their finest, brought a picnic, and enjoyed a day at the fair. In 1956 the game took on a bit more seriousness as the two teams, both unbeaten in their conference, vied for a spot at the Orange Bowl.  Tickets for this game were in such demand that rumor holds that funeral directors in Columbia received calls asking if any of their recent customers might be ticket-holders.  After a long day, Clemson won 7 – 0.

Columbia was delighted with the crowds that flocked to the capital each year see the game. However, in the late 1950s, Clemson began to see an advantage in playing on home turf.  The 1959 game would be the last as the two schools moved to the tradition of meeting at the end of the season on alternating campuses. Clemson won the last “Big Thursday” game, 27 to 0.  The series ended with the Tigers at a 33-21-3 lead.