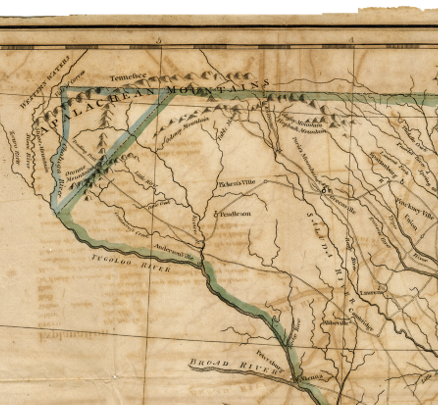 This 1802 Map of South Carolina was prepared by Thomas Coram for John Drayton’s “A View of South Carolina”. It shows, in blue outline, the small area in the corner of the state described as “Lands, which being within the Boundaries of South Carolina, the Cherokee are permitted to enjoy during their good behavior.” From the collections of the South Carolina Historical Society.

After more than three years of hostilities, Cherokee Indians signed a treaty with South Carolina’s Lieutenant Governor William Bull at Ashley Ferry Town on September 23, 1761. At the time that Europeans began to explore South Carolina, the Cherokees held most of the land in northwestern South Carolina. By the 1750s, their settlements were known as the Lower Towns and included Keowee, Toxaway, and Seneca. In the early 1750s, the Cherokees allied with the British against the French, but after 1757 European encroachment on Cherokee land strained the relationship. In late 1768, settlers attacked and killed several Cherokee warriors in Virginia. The Indians retaliated by attacking settlers in North Carolina in the spring of 1759 and the conflict soon moved into South Carolina.

Fort Prince George was constructed by the British in what is now Pickens County and was used to launch three attacks on the Indians. The Cherokees responded by killing several settlers in the area. Following that incident, Governor William Lyttelton took two Cherokee headmen hostage and negotiated a treaty in late 1759. However, early the next year, the Cherokees ambushed Fort Prince George and killed Lieutenant Richard Cotymore, the commander. Governor Lyttelton issued a call to the British for troops to help the settlers. He then returned to England and left the matter in the hands of Lieutenant Governor William Bull, Jr.

Under the command of Colonel Archibald Montgomery, sixteen hundred British troops headed to the upcountry in April 1760. They burned Estatoe and other Lower Towns and relieved the men stationed at Fort Prince George. Thinking he had secured the area, Montgomery returned to Charleston. However, the Cherokees moved into what is now Tennessee and laid siege to Fort Loudoun. In August 1760, the Indians killed twenty-four men who had been stationed at Fort Loudoun and took several others captive. Governor Bull negotiated to ransom the hostages at the same time he prepared another expedition.

In the summer of 1761, Bull sent Colonel James Grant, a Scottish soldier who served with Montgomery, with over 2,400 troops to the upcountry of South Carolina. They wiped out fifteen Cherokee towns and destroyed roughly fifteen thousand acres of crops. By July the Cherokees had no choice but to surrender and negotiate a treaty, which was signed at the site of a ferry over the Ashely River (later known as Bee’s ferry). Known as the Treaty of Charleston, it called for both sides to exchange hostages; named Little Carpenter, who was a pro-English Cherokee leader, emperor of the Cherokees; expelled all Frenchmen from Cherokee territory; and created a dividing line that allowed white settlement on much of the Cherokee’s hunting lands. It also called for quick executions of any Cherokee who murdered a settler and for renewed trade between the Indians and the English.