September, 1895: Frances Gibbes enrolls at the University of South Carolina 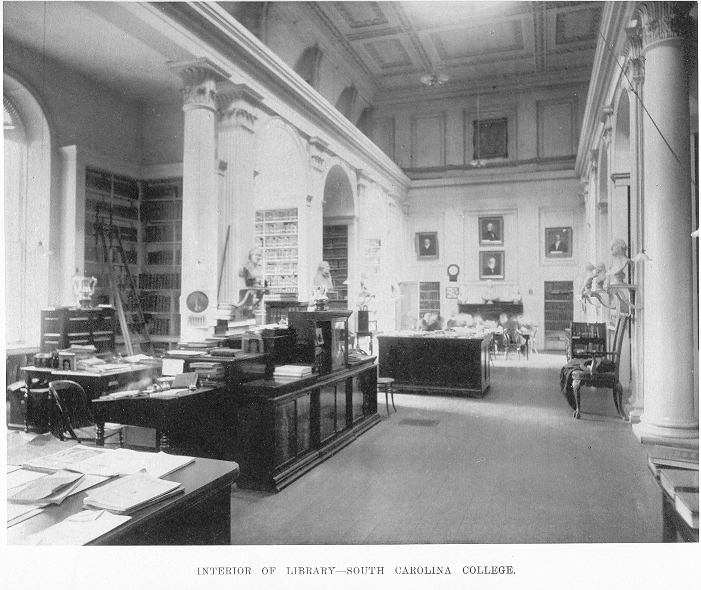 The Interior of the Library at South Carolina College when Frances Gibbes attended classes there.

In 1893, the state legislature approved a bill requiring South Carolina College, now the University of South Carolina, to admit women.  On September 24, 1895, Frances Guignard Gibbes was the first woman admitted to the College.  The daughter of Wade Hampton Gibbes and Jane Mason Gibbes, Frances was nearly 25 when she made history at the institution.  Born in Columbia, she took classes until 1899 and also studied in Massachusetts, under the writer Josephine Preston Peabody.

Frances Gibbes went on to become a playwright and poet.  Her first publication, Book of Poems, was released in 1902.  Twenty years later, she won the Town Theatre literary prize for her play, Jael. Her most popular work was a play, The Face, which was produced in Columbia as well as in New York, Mississippi, and Palm Beach, Florida.

Gibbes married Oscar L. Keith, a professor of modern languages at the University of South Carolina, in 1911.  They traveled extensively and had one daughter.  She was also heavily involved in community affairs in Columbia.  In her hometown, Gibbes was active in the Columbia Arts Association, the Drama Club, and the Quill Club.  She was also a member of the National Arts Club of New York.  Gibbes was inducted into the Women’s Who’s Who of America in 1914.

In addition to her literary interests, Gibbes is remembered for her support of women’s suffrage, and according to her entry in Who’s Who, her advocacy of “social, educational, and religious uplift.”  During World War I, she served as the state chairman of the Fatherless Children of France organization, which worked to place French orphans in homes.  Gibbes died in 1948, and is buried in Elmwood Cemetery in Columbia.