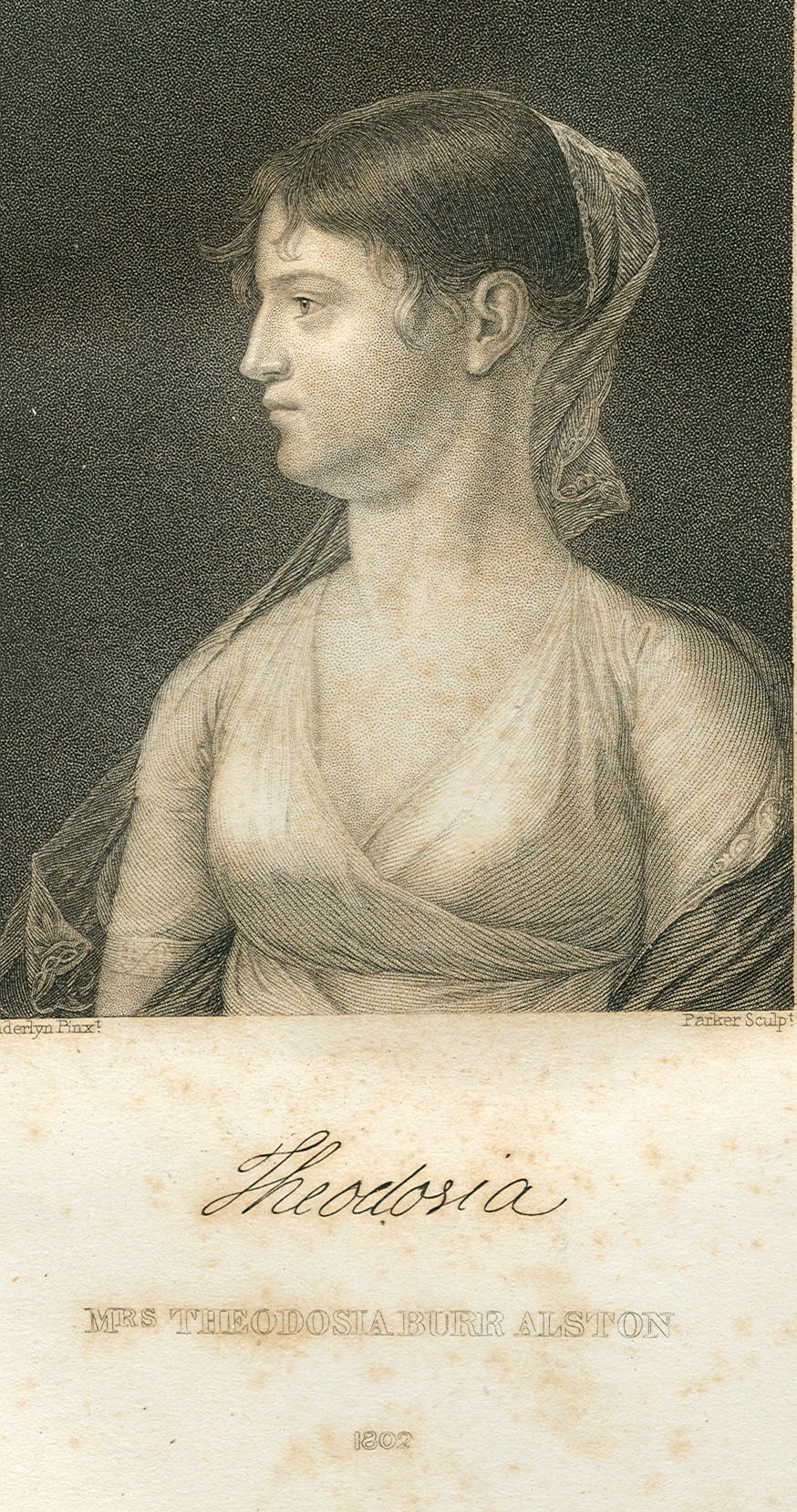 Image courtesy of the Library of Congress.

If you’ve seen the musical “Hamilton,” you have heard the lovely ballad titled “Dear Theodosia” that Aaron Burr sings to his baby daughter. Theodosia was Burr’s only child and received an outstanding education that was rarely provided to females in the eighteenth century. Like her mother, Theodosia Prevost, the younger Theodosia was extremely intelligent. In addition to speaking three languages, she read Greek and mastered subjects such as arithmetic, music, and English composition.

After losing her mother at ten years old, Theodosia grew even closer to her father. At just 14, she served as hostess for the elaborate parties that her father held at his country estate, Richmond Hill, near New York City. Both charming and pretty, she had a great many suitors. In 1801, she married Joseph Alston, the son of a wealthy rice planting family from South Carolina’s Georgetown District.

The couple resided at The Oaks, and had one son, Aaron Burr Alston. The birth was difficult for Theodosia and left her with multiple medical conditions. She struggled with illness for the remainder of her life. While she loved her husband and doted on her son, Theodosia missed New York and her father, and frequently traveled north to visit him. She was with Aaron Burr when he was tried for the murder of Alexander Hamilton and later accompanied him to Ohio. In 1807, Burr was denounced as a traitor and tried for treason. He was once again acquitted but left the country with a ruined reputation. These ordeals weakened Theodosia’s already poor health and she returned to South Carolina.

In 1812, Theodosia’s ten-year-old son died of malaria. With her father still overseas, she sank into a deep depression. Burr returned late in the year and wanted Theodosia to visit him. By this time, the United States was at war with Great Britain and her husband, Joseph, worried about her safety as she travelled. She insisted and Joseph, who was Governor of South Carolina, sent a letter to the British Navy requesting safe passage. Burr sent Timothy Green, a physician and good friend, to accompany her on her journey.

On December 31, 1812, Theodosia, her maid, and Dr. Green boarded a schooner named the Patriot at Georgetown. Soon thereafter the Patriot lifted anchor and set sail for the open sea. The ocean voyage from South Carolina to New York normally took five or six days. After two weeks had passed with no sign of Theodosia or the ship, Joseph Alston and Aaron Burr became frantic. They knew that there had been a gale off Cape Hatteras around the first of January that had scattered the British fleet. Alston wrote, “Another mail and still no letter! I hear too rumors of a gale off Cape Hatteras [North Carolina] at the beginning of the month. The state of my mind is dreadful!”

In New York, Theodosia’s father refused to credit any of the rumors of her possible capture, choosing to believe that she had died at sea. When a friend offered hope that Theodosia was still alive, Burr replied, “No, no, she is indeed dead. Were she still alive, all the prisons in the world could not keep her from her father.”

The Patriot had disappeared without a trace; its fate remains a mystery. It was later learned that the British fleet had stopped her off Cape Hatteras on January 2, 1813. Governor Alston’s letter had worked, and the schooner was allowed to pass. Later that night, a gale arose and scattered the British fleet. Beyond that clue, no more was known. Burr sent searchers to Nassau and Bermuda with no success.

Theodosia Burr Alston most likely died at sea on January 2 or 3, 1813.