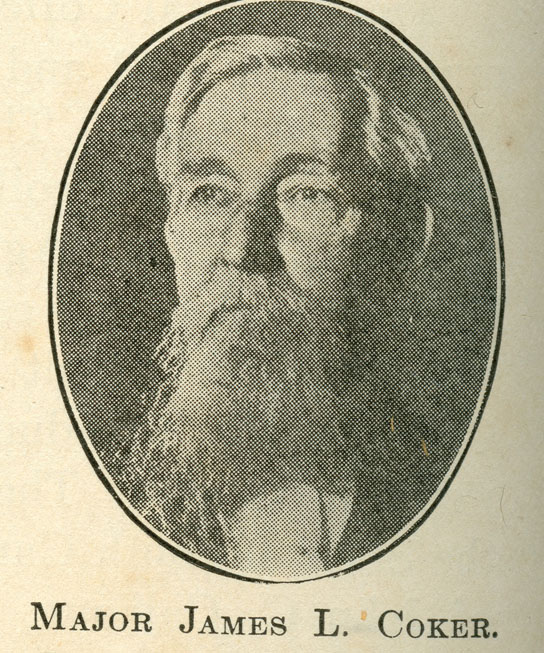 Portrait of James Lide Coker, from the Collections of the South Carolina Historical Society.

James Lide Coker was born to Caleb Coker, a planter and merchant, and his wife Hannah Lide, in 1837. After attending St. David’s Academy, Coker attended The Citadel and Harvard University, where he focused on agricultural management. When he was twenty-three, Coker married Susan Stout. Just a year after they were married, the Civil War broke out and Coker served in the Ninth South Carolina Infantry. He was promoted to the rank of major before being wounded at Lookout Mountain, Georgia, in 1863. During that conflict, the major’s leg was shattered and he was taken prisoner by Union forces.

After ten months as a prisoner, Coker made an arduous trip home to find the Pee Dee region in ruins. Despite his injury, he set out to rebuild his farm and the local community. He opened a general merchandise store, J. L. Coker and Company, in 1865. With a keen knowledge of cotton production, Coker expanded into factoring and production. He built a cotton mill, cotton gin, and cotton seed oil mill. In 1874, he partnered with G. A. Norwood to develop a firm in Charleston, which lasted until the early 1880s. His other ventures focused on the area in and around Darlington County where he organized two banks, a railroad, a cotton fiber company, and other businesses. Two of Coker’s firms were merged into Sonoco, which became a large supplier of packaging goods.

Coker’s interest in education led him to build a private high school in Hartsville in 1894. When South Carolina created a public high school system in 1907, Coker opted to convert the school into a women’s college. He donated funds to add an administration building and dormitory as well as establish an endowment for the school. Coker University is now a coeducational, private liberal arts institution. Coker was a faithful man who taught Sunday School for years.

James Coker died in Hartsville in 1918. The fact that he focused on manufacturing and business, held no grudges against the Union and worked to better his state and community have caused him to be remembered as an exemplary figure of the New South movement. His great grandson, Will Joslin, has recently completed a biography titled God, Guts, and Gallantry: The Faith, Courage, and Accomplishments of Major James Lide Coker.